You can find James on Twitter or LinkedIn. This is our recent interview with him, as part of our Kinsta Kingpin series.

I’m a creator of things at heart. By that I don’t necessarily mean software; I’ve started products, businesses, systems, and strategies. Anything that can that can be built up from nothing, or at least very little. I’ve not always been successful at it, mind you. It’s just something I’m always drawn to. This makes me a great employee for the first year and a terrible one after, at least with the companies I’ve worked for in the past. I tend to take the position I was hired for as far as I possibly can, and then I get bored. I need to create something new, but I’ve usually exhausted the limits of my current role.

In 2005 I had just started a new church. That’s right, I said a church, but that’s a story for another set of questions. You may not know this, but starting a church doesn’t usually pay a lot, so I needed to find a way to make some money to provide for my family. I had been doing graphic and web design as a hobby for a few years and my friend, Kevin Stover, had some development background, so we decided to try our hand at freelancing. We had started building Flash websites and, in the process of experimenting with other tools for web publishing, I stumbled upon WordPress. In the beginning, it was just customizing the style of my theme and copying snippets of PHP I found across the web. Once I attempted to build my first custom plugin, forget it, I was hooked.

Most people know me as the co-creator of Ninja Forms, a WordPress form builder for people who want powerful software that’s also beautiful. That product is still growing and innovating. We are really digging in and listening to our users and the greater community to find ways we can be better and push the software further. 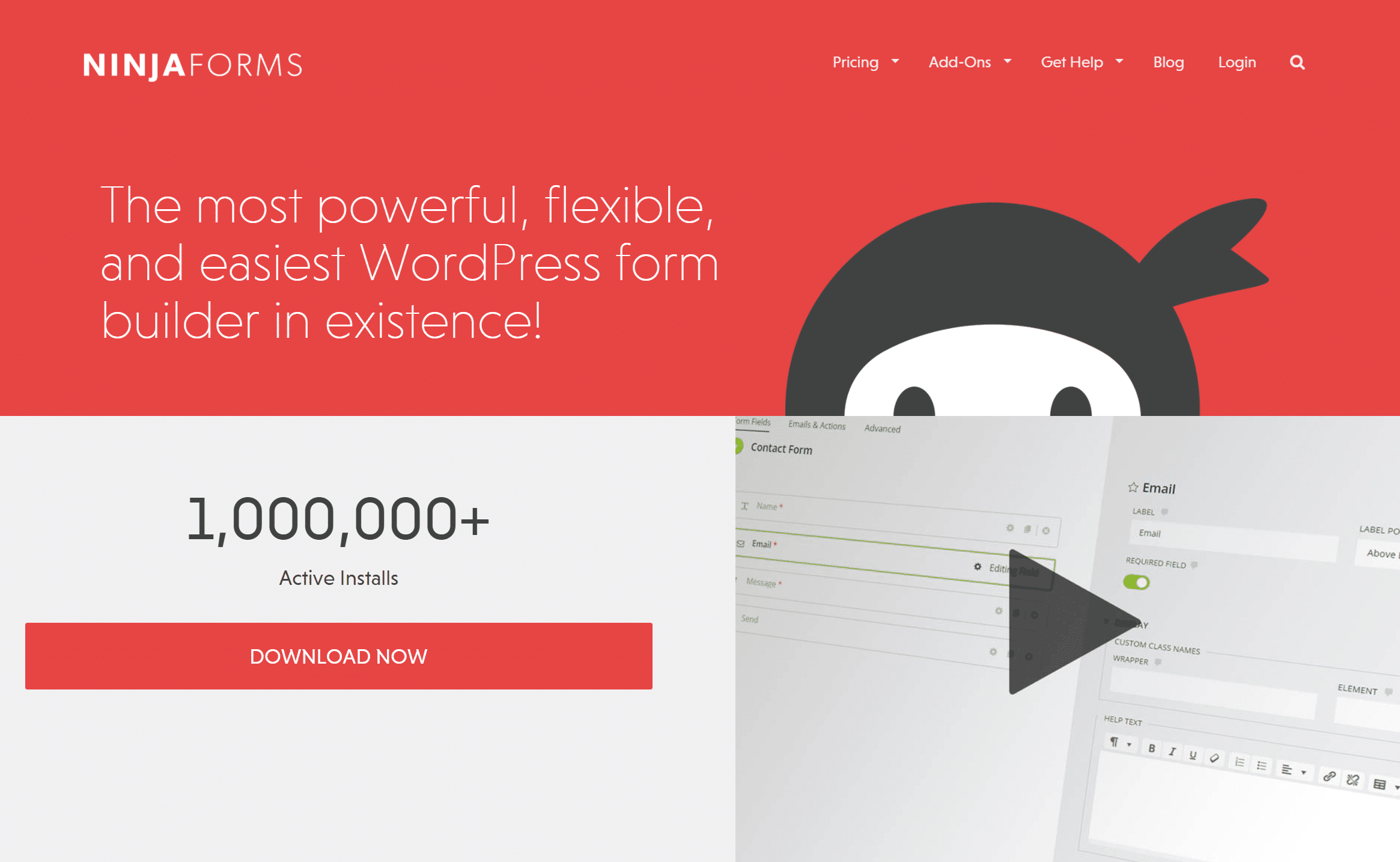 Something that many may not know is that Ninja Forms is only one of our interests. Our parent company, Saturday Drive, always has 3 to 4 other projects in the works. They’re not all always directly related to WordPress, but many of them help us serve the WordPress community better.

The biggest challenge, and I don’t think I am unique in this, is the challenge of disappointment. Above, I started my story with you in 2005. Ninja Forms was created in 2011 and didn’t really get any traction until 2013. In that time we struggled to get clients and started several different ventures that didn’t pan out. There’s also the church, which I would call a success for a variety of reasons, that never really grew to sustain itself. That isn’t even discussing all the things before 2005. Eight plus years of several break-evens and twice as many failures can be demoralizing.

Ninja Forms launched in 2011 in a very saturated market. In its first big coverage from a well-trafficked WordPress news site at the time, the comments were less than favorable. We were told to just shut the whole thing down. After all, anyone who might have been a customer already had the access to the market leader. In the back of my head, a little voice spoke up, “here we go again. Another flop to add to the list.” Many people might have quit right then, but not me. I’m a glutton for disappointment, and I would remain disappointed for the next year and a half. It seemed they were right; sales were either low or non-existent. We had one more experiment to try, and it was going to be a costly one.

Kevin and I spent a year and a half rebuilding Ninja Forms with a new development and business model. It eventually launched in January of 2013. From a business perspective, we were throwing good money after bad; if we counted the hours it cost us to rework Ninja Forms, it would have been more than twice what we had made in the past year and a half. But it worked! The sales started increasing, and month over month the growth was exponential. It’s still goring to this day, but we could have just as easily quit from disappointment and a lack of immediate gratification. Sometimes you should give up. But sometimes you should ignore the voices telling you to give up, especially your own.

The biggest challenge is knowing the difference.

The community. I wish my answer was going to be profound and unique, but alas, it’s what most notice upon entering this crazy WordPress world.

Having been a part of other industry-specific communities, I’ve never found another one be as inviting, accepting, and nurturing. We owe much of our success to the community that accepted us as equals, even though we were relatively unknown. The community reviewed our code and product, assisted when we had questions, and an infinite number of other acts of kindness were instrumental in our rise as one of the dominant WordPress Form builders.

Ninja Forms is the most innovative form builder in the space and we don’t plan to slow down any time soon. We are ramping up some really cool new features, add-ons, and services that are going to take forms to whole new levels.

We are going to continue supporting our WordPress community at our local Meet-up, WordCamps, and providing great products, services, and resources. We love this community and plan to be a part of it for as long as they’ll have us.

I look for the same things everyone else looks for I think: great uptime, fast, secure and well-maintained servers, and good customer service. But those are the base expectations and they aren’t usually remarkable. Since I run an ecommerce website, I want to know that if anything goes wrong there is someone available to fix it immediately. I’m not concerned with who is at fault or what mistakes were made; I just want my site back up and serving my customers. The host that takes that responsibility seriously always wins in my book.

I have a 3 year old son which keeps me pretty busy pretending to be a ghost from Pacman, but when I’m not being chased by him I’m still usually on my laptop. Most of my hobbies are actually still on a laptop. As I said previously, I love creating things. I’ve been collecting playing cards for a few years now, and I’ve decided to try my hand at designing my own decks of cards. I’m still in the early stages so it’s a lot of exploration at the moment.

The reason I started collecting playing cards is I’ve always been a big enthusiast of close-up magic, so I read a lot about that as well and fancy myself an informational card technician. By that I mean I know much of the techniques used and dabble in them myself from time, but would probably never demonstrate to another person.

I would recommend interviewing Andy Wilkerson. He is a super talented designer and entrepreneur. He has an amazing collection of themes that he sells and is working on a some very cool new services that are going to impact those wanting to launch a podcast in a very positive way.