How to Import Tumblr to WordPress (Quick and Easy) 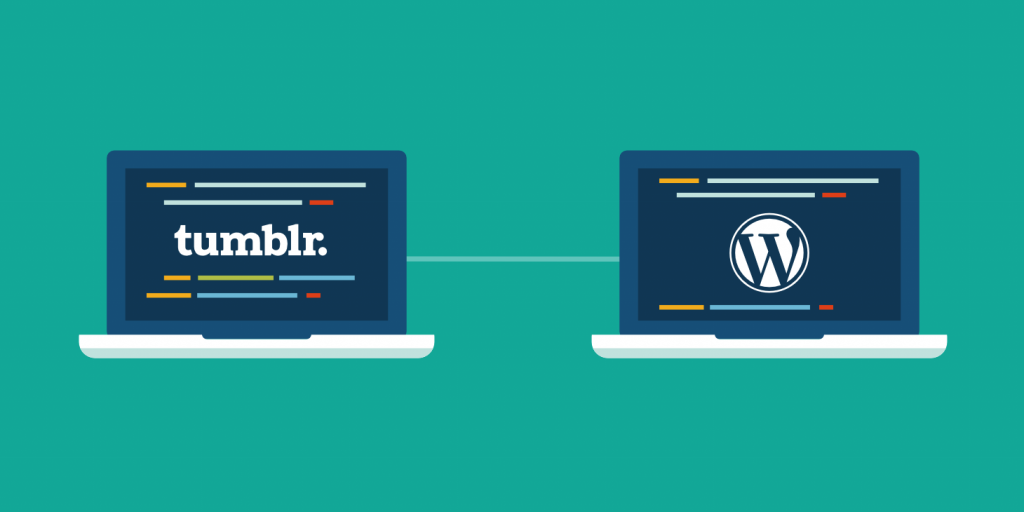 Have you been blogging on Tumblr? While it’s no doubt a great platform for microblogging, it’s somewhat limited, especially when you compare it to most other content management system and blogging platforms out there. If you want to take your blog to the next level, then we recommend moving it to WordPress.

Tumblr gained a lot of traction when it was first released. And it’s still used by popular sites such as The Industrialist. But according to Google Trends, it has been on a decline for the past five years. It’s only used by 0.1% of websites according to W3Techs, while WordPress is used by over 39.5% of the web.

In August 2019, Automattic (the company behind WordPress.com) acquired Tumblr from Verizon. However, at the moment, the Tumblr brand will remain separate.

Therefore, WordPress is an excellent option for bloggers due to the fact that it’s an easy platform to learn, there is a lot of support available, and you own your content. Not to mention the fact that you can do pretty much whatever you want to do with thousands of third-party plugins and themes.

If you’ve been blogging on Tumblr for a while, you’ve probably built up a large blog archive. Don’t worry, you don’t have to lose any of your work as you transition to a more advanced blogging platform. You can easily import Tumblr to WordPress.

Importing is an easy process, usually only takes a few minutes, and you can start building your blog on your own platform. Here’s how to do just that, step by step.

We always recommend taking a backup of your WordPress site before proceeding with any type of import job. This way you can easily roll back if there is a problem.

From the WordPress dashboard, go to Tools → Import. From that page, you have the option of importing several different platforms. Click on “Install Now” under the Tumblr option. This plugin is actually developed by the WordPress team and contributors. It imports posts, drafts, pages, and media (audio, video, and image posts). 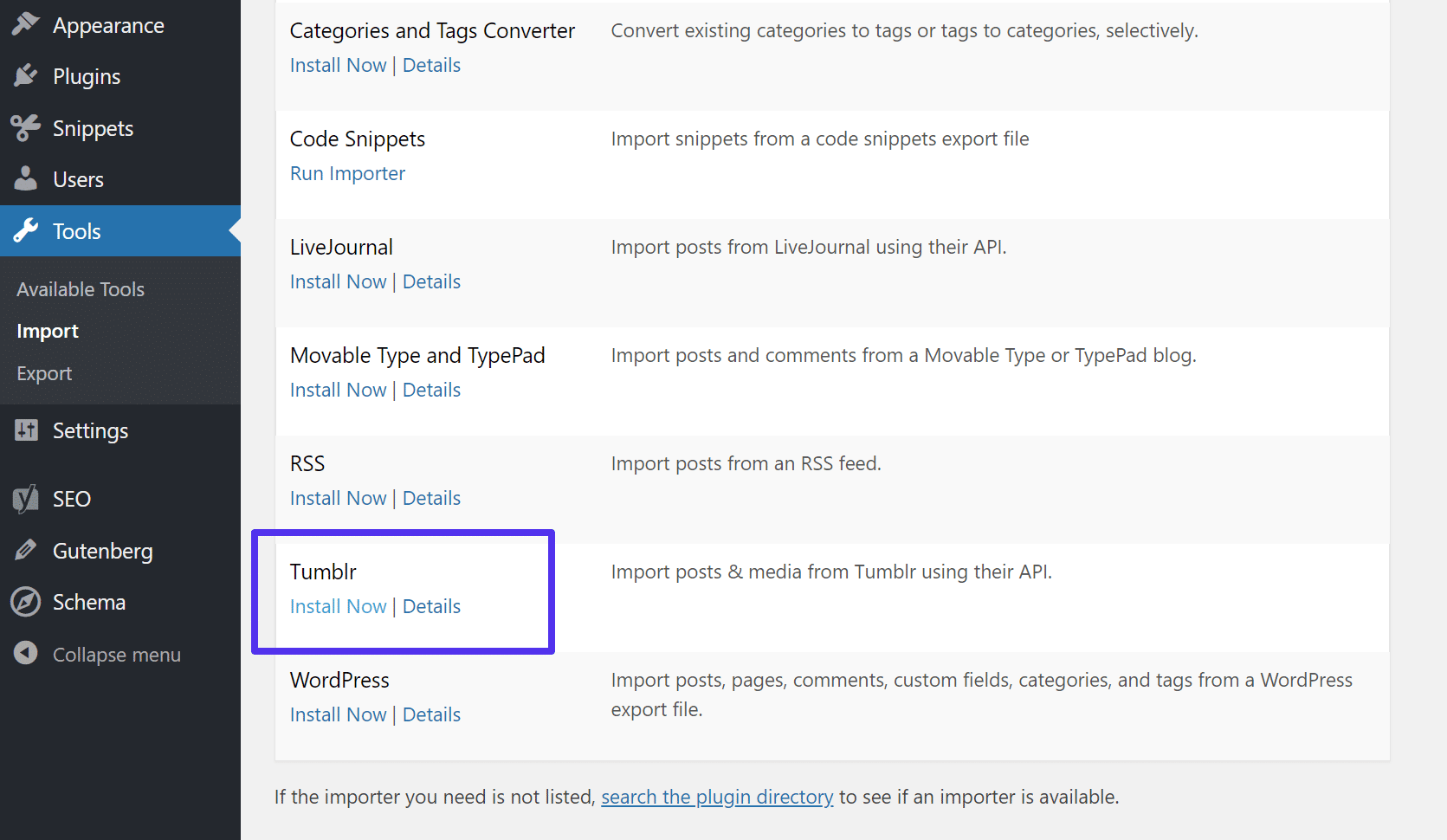 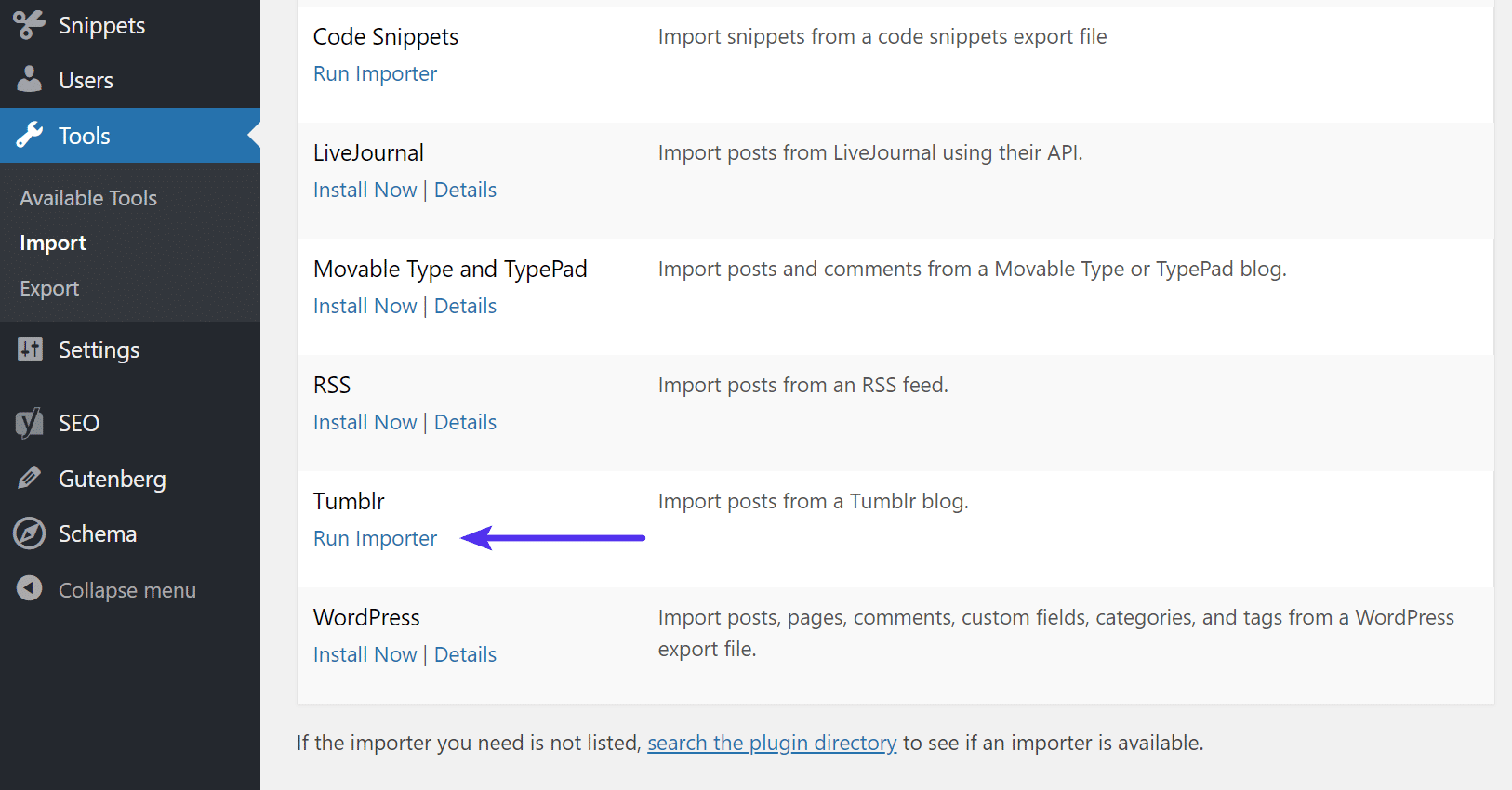 Before you can import your Tumblr blog, you have to create a Tumblr app to act as the connection point between your WordPress site and Tumblr’s servers. The Import Tumblr page will prompt you to visit the following URL: http://www.tumblr.com/oauth/apps. 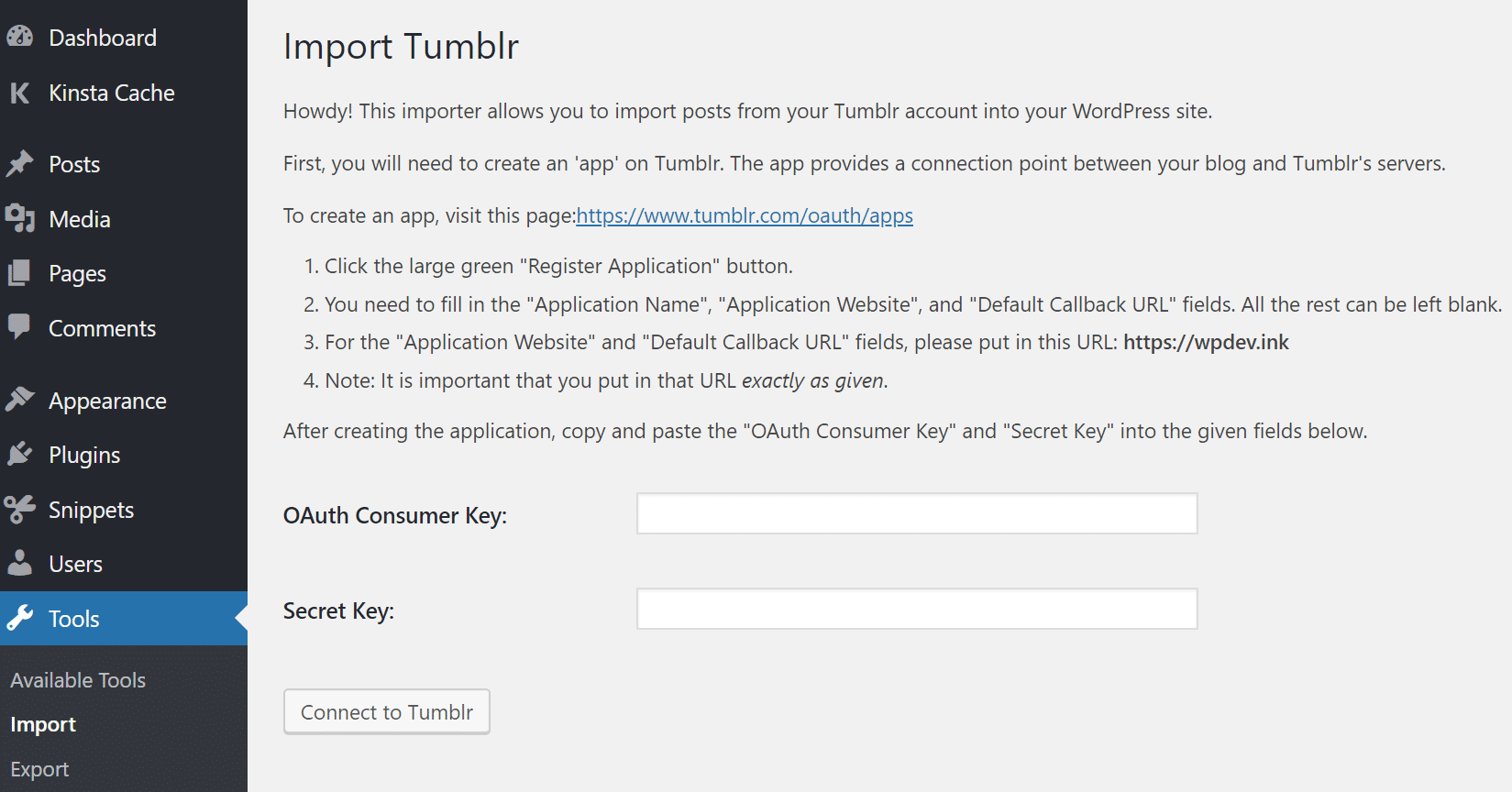 To create an application, go to your Tumblr Applications and hit the big green “Register application” button. 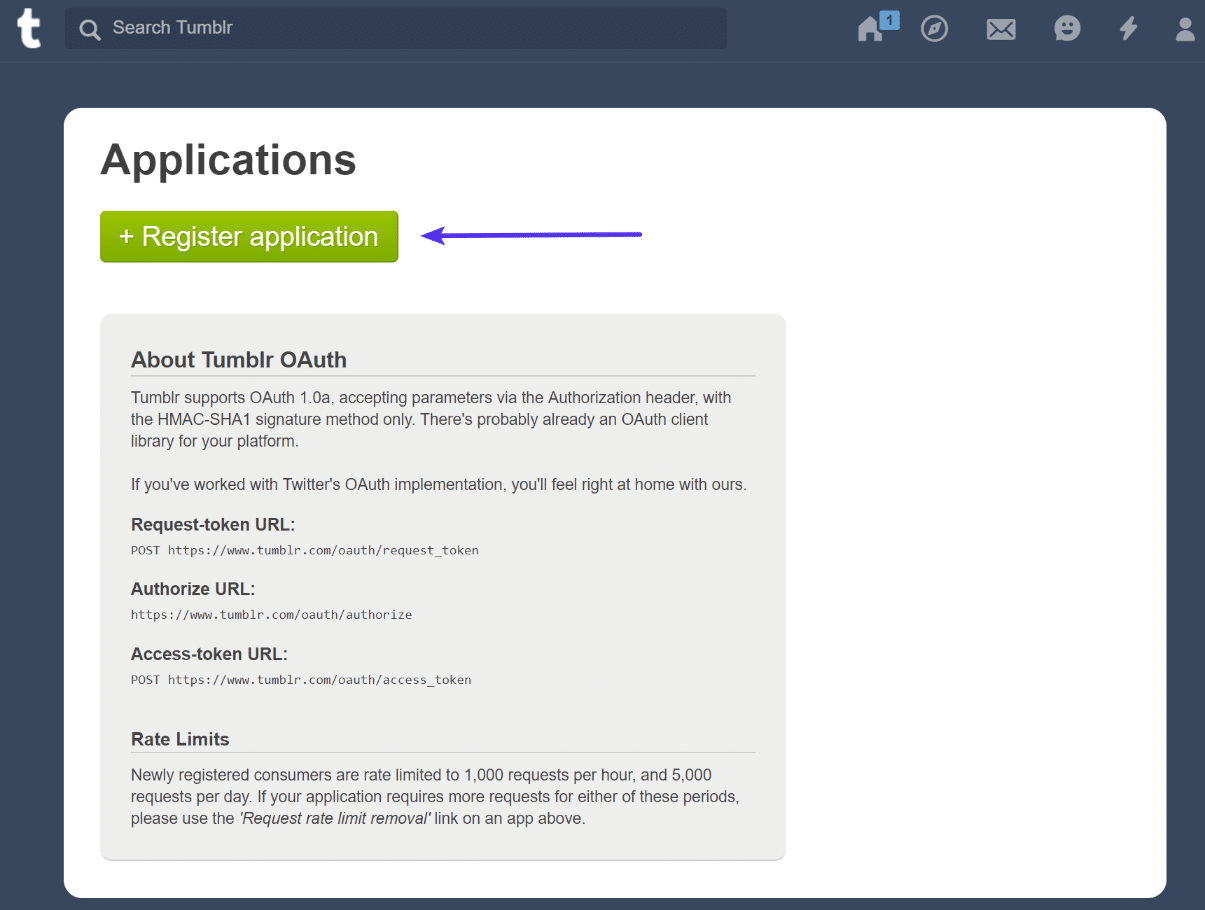 To register, you need to fill out the following information:

The rest of the fields can be left blank. The instructions on the Import Tumblr page in the plugin will give you the URLs for both the application website and the default callback URL (typically just your full domain name). After filling in the info, click on Register at the bottom of the application. 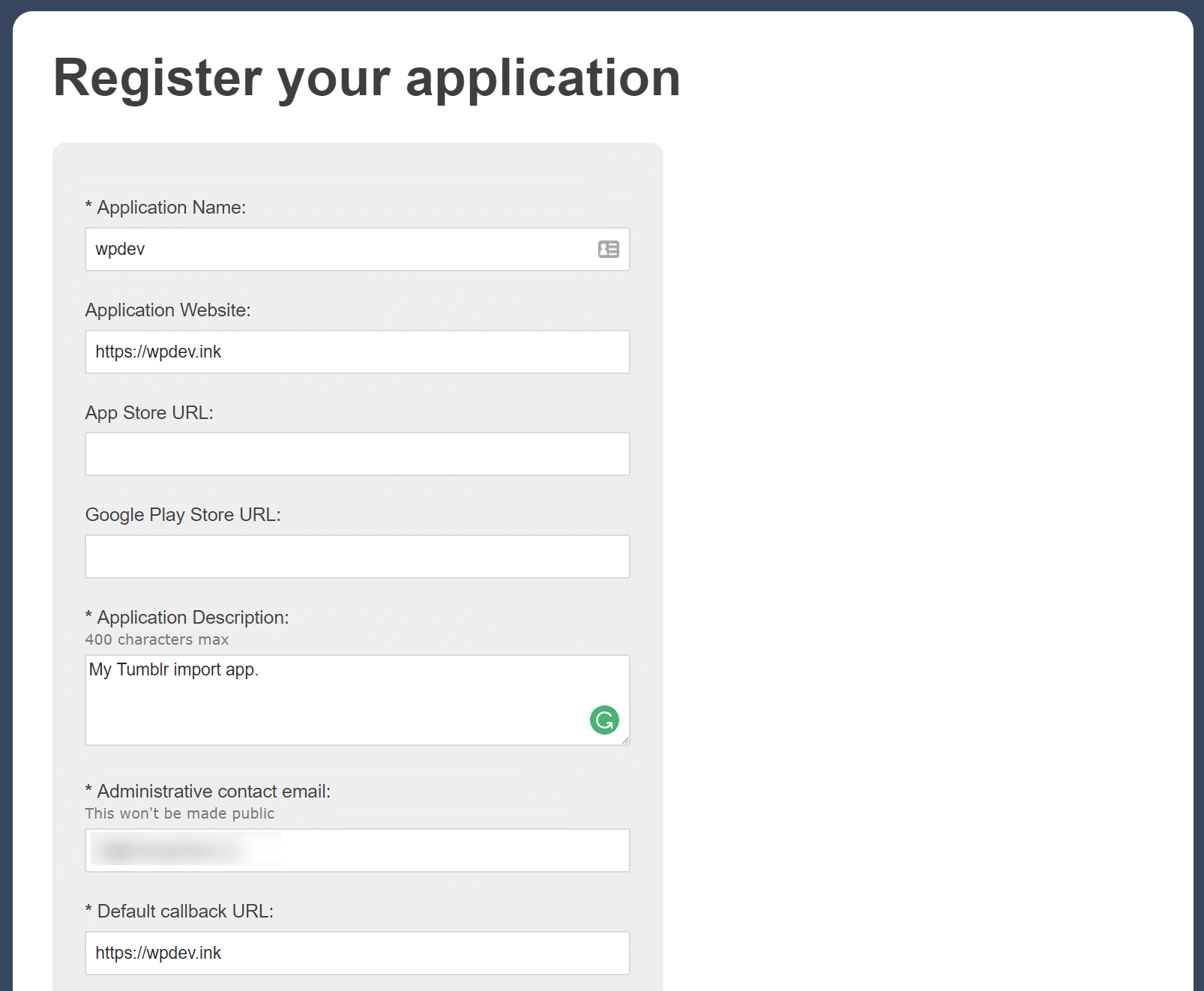 The page you get redirected to will have both your OAuth Consumer Key and the Secret Key on it. Add these back in the Import Tumblr page in your WordPress dashboard and click on “Connect to Tumblr.”

You will then be redirected to Tumblr. They will ask you “Is it alright for this application to access some of your data and make posts to your account?” Click on “Allow.”

You will then see the Tumblr blogs that are associated with your username and email address, along with how many posts will be imported. You can then assign a different author if you want. When you’re ready to import your Tumblr blog posts, click on “Import Blog.” 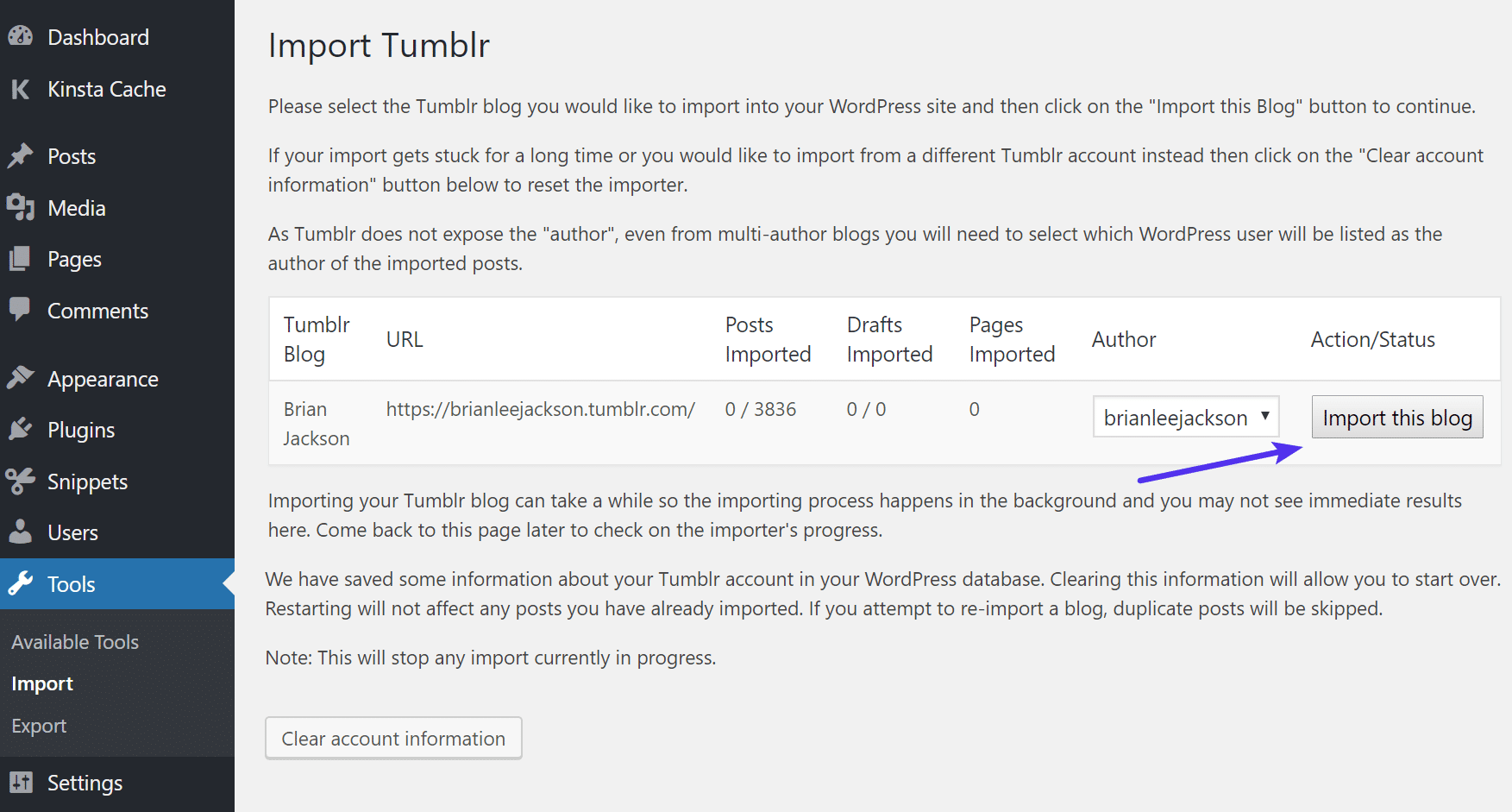 Importing your Tumblr blog can take a while depending on how large your archive is. The importing process happens in the background so you can back to the “Import Tumblr” page to check on the importer’s progress. Once all your blog posts have been imported, they will be listed in your WP Admin → Posts dashboard. 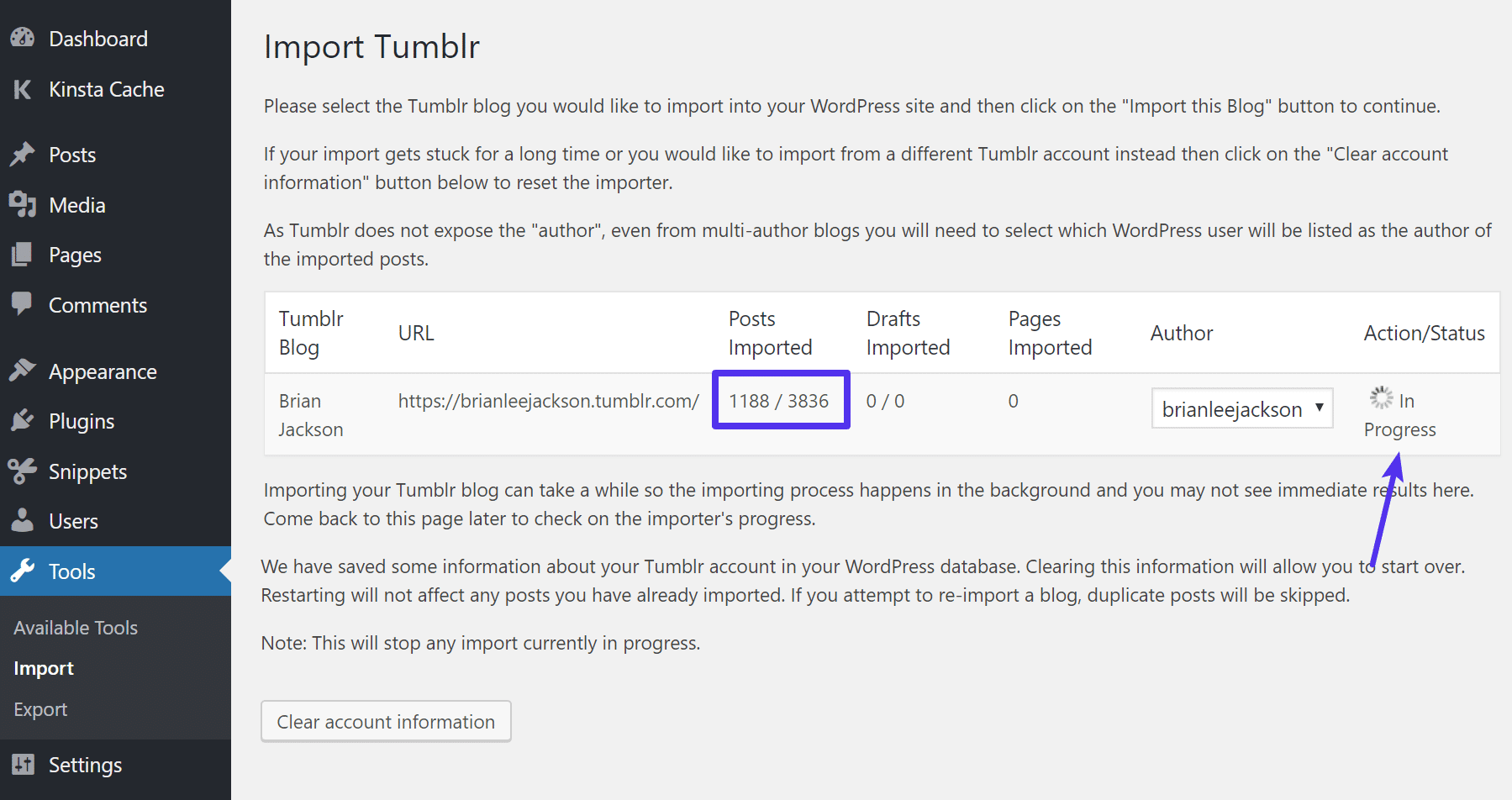 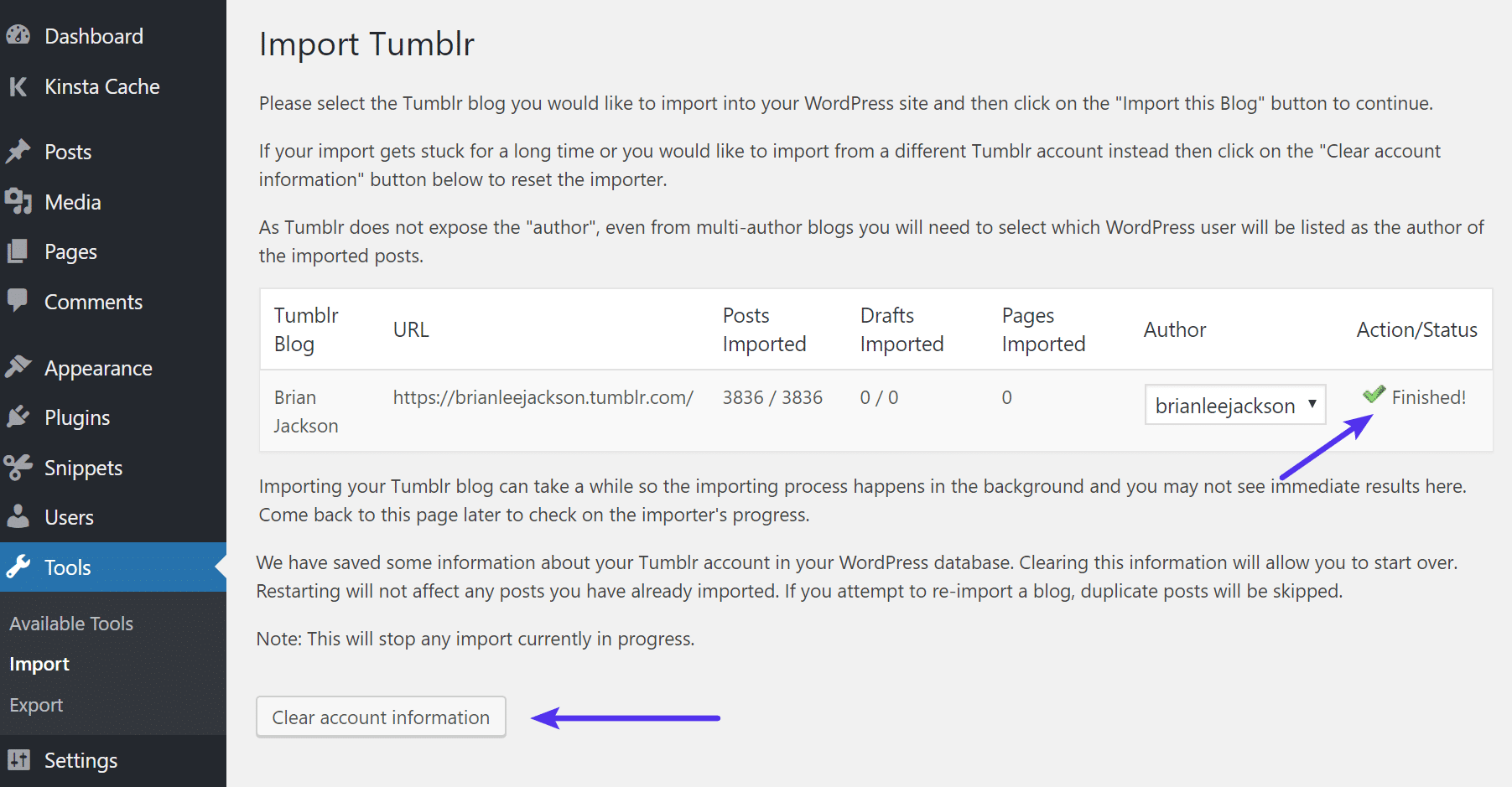 This will not affect any posts you may have already imported, but it does let you start over or import another blog. If you try to import the same blog, any duplicate posts will be skipped. And don’t forget about your SEO. If you changed domains our URLs, you’ll want to setup 301 redirects from Tumblr to WordPress.

If you’re having any issues with the above method, or you need more advanced mapping options, we recommend checking out the premium Tumblr to WordPress migration plugin from CMS2CMS. These guys do nothing but migrations between various CMS platforms, so they’ve experienced just about every odd thing that could go wrong.

The plugin is actually free and will allow you to complete a demo migration to see how it works before completing the data migration. The price depends on the amount of data you’re moving from Tumblr to WordPress. This plugin has many more features over the default importer, such as:

They will even set up 301 redirects from your existing Tumblr site to your new WordPress site. This is an important step in retaining your SEO link juice.

Tumblr can be great for starting out, but once you get serious you’ll want a platform you can control. Check out these 10 additional reasons why you should use WordPress.

Now that you’ve imported all your great Tumblr posts into your new self-hosted WordPress website, you can focus on building up your blog. You own the content and you control the site. Now go do something awesome with all that content from your Tumblr blog.

Have any questions? Run into any issues importing your Tumblr blog? Let us know below in the comments.