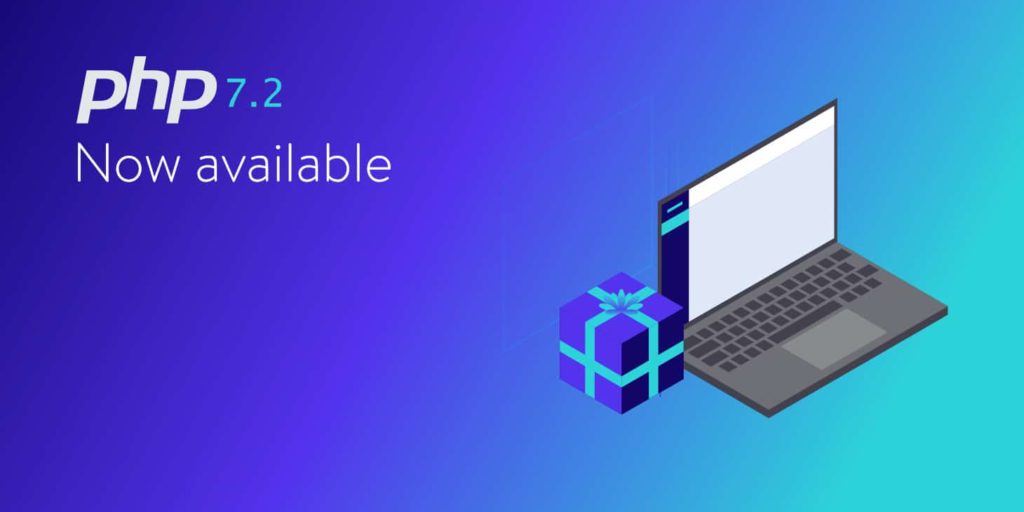 PHP 7.2 has been officially released as of November 30. The release has new features, functions, and improvements that will allow us to write better code. In this post, we’ll introduce some of the most interesting language features with PHP 7.2.

Update: PHP 8.0 is now available to all Kinsta clients.

You can see the full list of changes on the Requests For Comments page.

Since PHP 5 we are allowed to specify in a function’s declaration the argument type that is expected to be passed. If the given value is of an incorrect type, then PHP throws an error.

Argument type declarations (also known as type hints) specify the type of a variable that is expected to be passed to a function or class method.

In this code, the test function expects an instanceof MyClass. An incorrect data type would result in the following fatal error:

Since PHP 7.2 type hints can be used with the object data type, and this improvement allows to declare a generic object as argument of a function or method. Here is an example:

In this example we’ve called the test function twice, passing a different object at each call. This was not possible in previous PHP versions.

Return type declarations specify the type of a variable that is expected to be returned by a function.

As of PHP 7.2 we are allowed to use return type declarations for the object data type. Here is an example:

PHP currently does not allow any variance of parameter types between child classes and their parent classes or interfaces. What does that mean?
Consider the following code:

Here we’ve omitted the parameter type in the subclass. In PHP 7.0 this code produces the following warning:

Since PHP 7.2, we are allowed to omit a type in a subclass without breaking any code. This proposal will allow us to upgrade classes to use type hints in libraries without being required to update all subclasses.

A trailing comma after the last item in arrays is valid syntax in PHP, and sometimes it’s encouraged in order to easily append new items and avoid parse errors due to a missing comma. Since PHP 7.2 we are allowed to use trailing commas in grouped namespaces.

See Trailing Commas In List Syntax for a closer view at this RFC and some examples of code.

Argon2 is a powerful hashing algorithm which was selected as the winner of 2015 Password Hashing Competition, and PHP 7.2 will bring it to us as a secure alternative to the Bcrypt algorithm.
The new PHP version introduces the PASSWORD_ARGON2I constant, that can now be used in password_* functions:

Unlike Bcrypt, which takes only one cost factor, Argon2 takes three cost factors distinguished as follows:

Libsodium as part of PHP Core

Starting from version 7.2, PHP includes the Sodium library into the core. Libsodium is a cross-platform and cross-languages library for encryption, decryption, signatures, password hashing and more.
The library was previously available through PECL.
For a documented list of Libsodium functions, refer to the library Quick Start Guide.
See also PHP 7.2: The First Programming Language to Add Modern Cryptography to its Standard Library.

Here is a list of PHP 7.2 deprecated functions and features that will be removed no later that PHP 8.0:

The __autoload function has been superseded by spl_autoload_register in PHP 5.1. Now a deprecation notice would be thrown when it’s encountered during compilation.

The $php_errormsg variable is created in the local scope when a non-fatal error is thrown. Since PHP 7.2 error_get_last and error_clear_last should be used instead.

create_function() allows the creation of a function with a generated function name, a list of arguments and body code provided as arguments. Due to security issues and bad performance, it has been marked as deprecated and the usage of enclosures is encouraged instead.

mbstring.func_overload ini setting set to a non-zero value has been marked as deprecated.

(unset) cast is an expression that always returns null and is considered useless.

gmp_random() is considered to be platform dependent and will be deprecated. Use gmp_random_bits() and gmp_random_rage() instead.

each() is used to iterate over an array much like foreach(), but foreach() is preferable for several reasons, including being 10 times faster. Now a deprecation will be thrown on the first call in a loop.

The assert() function checks the given assertion and takes appropriate actions if the result is FALSE. The usage of assert() with string argument is now deprecated as it opens an RCE vulnerability. The zend.assertion ini option can be used to prevent evaluation of assertion expressions.

$errcontext is an array containing the local variables existing at the time an error is generated. It’s passed as the last argument to error handlers set with the set_error_handler() function.

What Does PHP 7.2 Mean for WordPress Users?

According to the official WordPress Stats page, as of writing this, only 19.8% of WordPress users have upgraded to PHP 7. And only 5% are using PHP 7.1. You can see that a large majority of users, over 40%, are still running on PHP 5.6. What’s even scarier is that over 39% of users are using unsupported PHP versions. As of December 2016, WordPress.org actually bumped up their official recommendation for users from PHP 5.6 to PHP 7 or greater.

The numbers above are especially discouraging coming from a performance point of view, as PHP 7 has shown to be significantly faster. Here are a few stats:

We also ran our own performance benchmarks in 2018 with PHP 5.6 vs PHP 7 vs HHVM. And similarly to the benchmarks above, we saw that PHP 7.2 could execute almost three times as many transactions (requests) per second as compared to PHP 5.6.

Many are slow to update simply because of the time involved with testing new all their third-party plugins and themes to ensure they function properly. But a lot of times, it comes down to they simply haven’t done it yet. Not sure what version of PHP you’re running? One of the easiest ways to check is to use a tool like Pingdom or Google Chrome Devtools. The first HTTP request header will typically show you the version.

This relies on the host not modifying the X-Powered-By header value. If they do, you might not see your PHP version, in which case you would need to upload a file via FTP. Or you can always reach out to your host and ask.

PHP 7.2 isn’t quite out yet, but once it is you can start testing. You could test your WordPress site locally or check your scripts in an environment like Docker, which allows you to test different versions of PHP from the command line.

Simply one-click change the PHP Engine for the staging site under “Tools” and you can start testing to ensure compatibility of your third-party plugins and themes. Once you confirm everything works, you can either change your production site over to PHP 7.2 or push your staging site to live.

Are you ready to switch to PHP 7.2? Hopefully, by now you have at least made the transition to PHP 7. If you haven’t now is a good time to start testing. So, upgrade your scripts, check your code and let us know your first impressions of PHP 7.2.