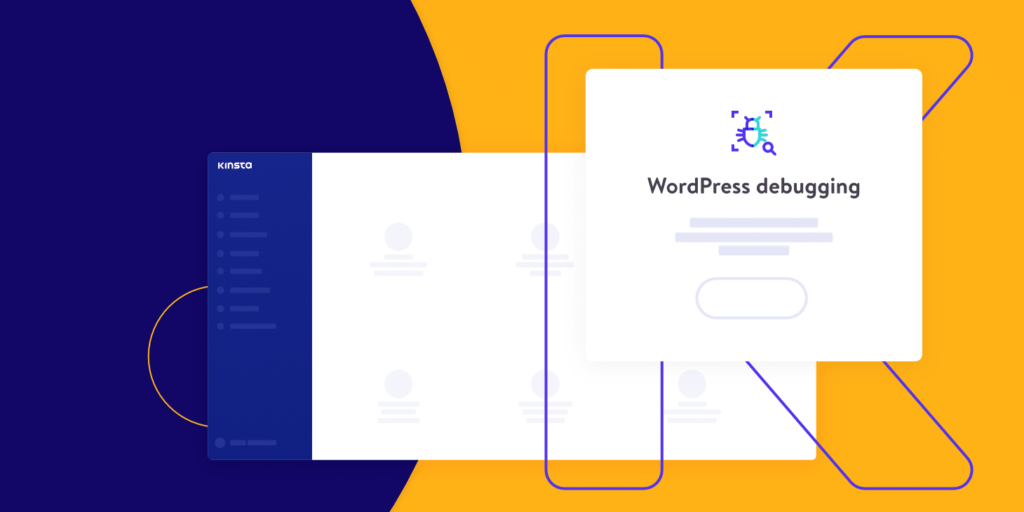 The holidays are quickly approaching, but our teams are still busy at work. We have a lot of new features and updates coming out before the end of the year that you’re not going to want to miss.

Today we are excited to release our new WP_DEBUG tool. This tool lets you easily see warnings, errors, and notices on your WordPress site. It’s already available in the MyKinsta dashboard. 🙌

We also have a few other updates and improvements to our MyKinsta dashboard which we’ll dive into below. Many come directly from your own requests! So thank you, and keep the feedback coming. We mean it. We want to know your struggles and pain points so that we can help fix them.

Many of you do a lot of troubleshooting and debugging in your daily workflows, especially those of you working with clients or writing custom code.

Typically whenever you’re trying to investigate an error or warning in WordPress, one of the first things thing to do is to enable WP_DEBUG. This is a PHP constant (a permanent global variable) that can be used to trigger the debug mode throughout your site.

Whether it’s an out of date plugin or PHP function causing problems, you simply need more data to determine what’s going on. This usually requires connecting to your site via SFTP, and dropping a line of code into your wp-config.php file. However, this isn’t very convenient. Many of you just need to see the warning or error and where it’s happening to quickly fix it.

Our new WP_DEBUG tool makes that a little easier!

How to Enable the WP_DEBUG Tool

In most cases, WP_DEBUG shouldn’t be used on a live environment. It’s a useful feature for debugging, but it can reveal text from your PHP code to visitors on your site. Use it on your staging environment. 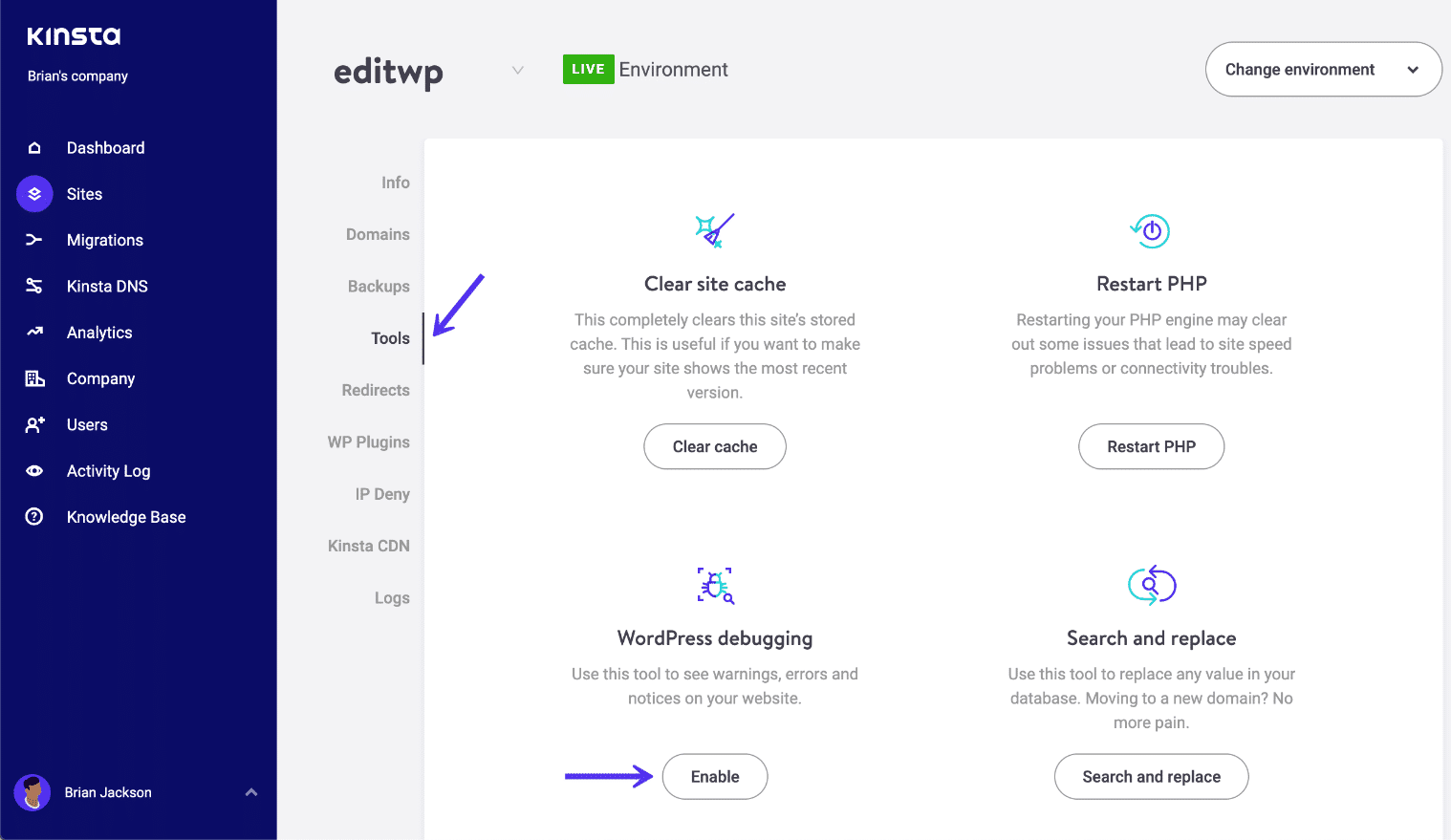 And that’s it! Behind the scenes, our platform is setting the WP_DEBUG constant to true in your wp-config.php file. You will then be able to see warnings, errors, and notices on your WordPress site (both on the frontend and the WordPress admin dashboard).

An example would be like the one below. It’s a notice complaining about an undefined property. With WP_DEBUG turned off you would never see this message.

Don’t forget to turn off debugging when you’re all done!

We’ve redesigned our Search and Replace tool in MyKinsta so that it’s easier to use. This has become a very popular tool and many are doing replacements on a regular basis. The whole idea is that you no longer have to bother installing a plugin or going to phpmyadmin to perform what in most cases should be a simple and quick task.

Previously the tool was found at the bottom of the tools page. We’ve now given the Search and Replace tool it’s own section as we’ll keep adding improvements to it as we move forward. 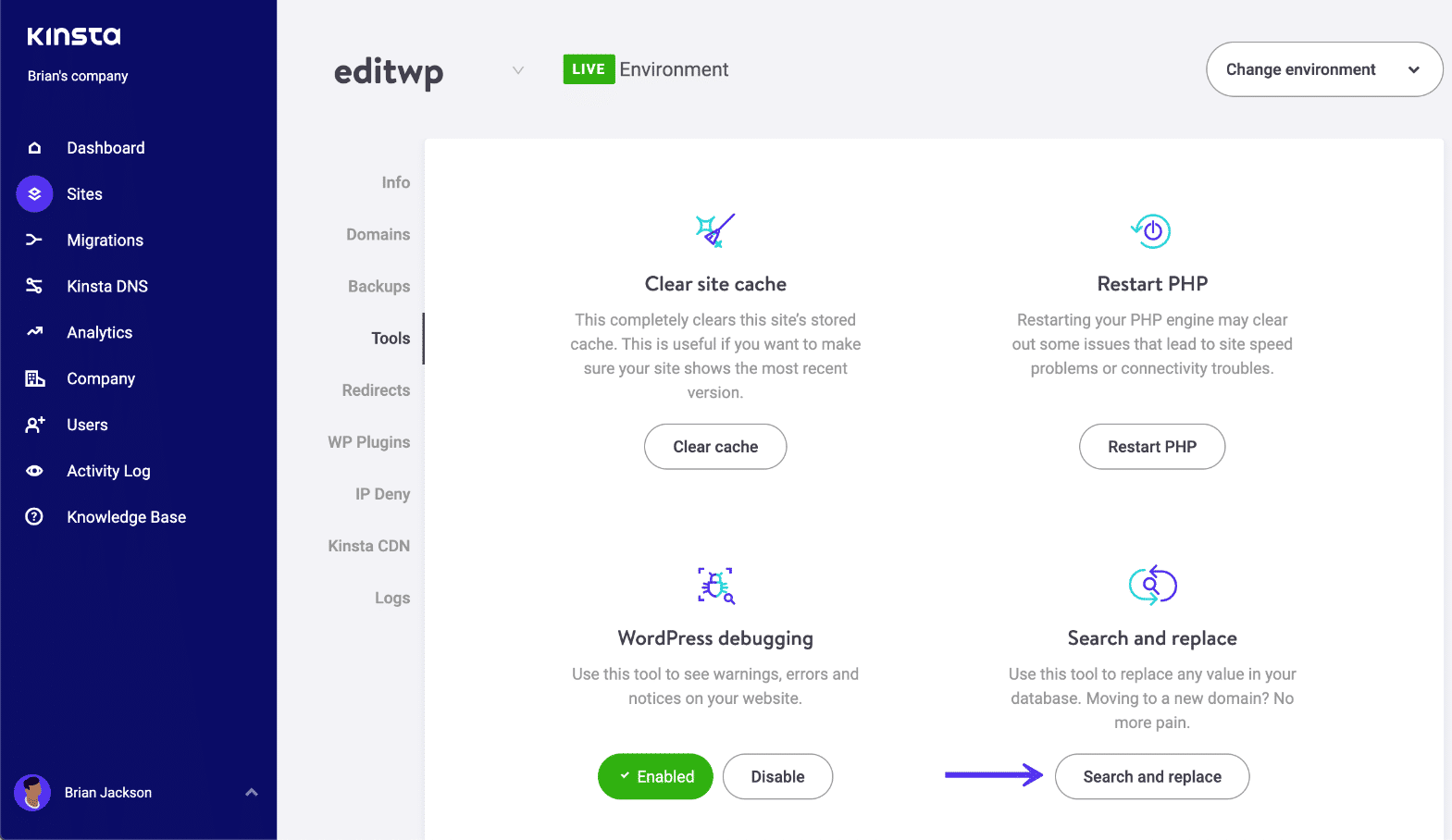 The UI for the tool has been redesigned and is much easier to use, especially for those that aren’t used to regularly doing these types of operations. Our platform will automatically take a backup before doing the replacement in your database and you can have it automatically clear your site cache. 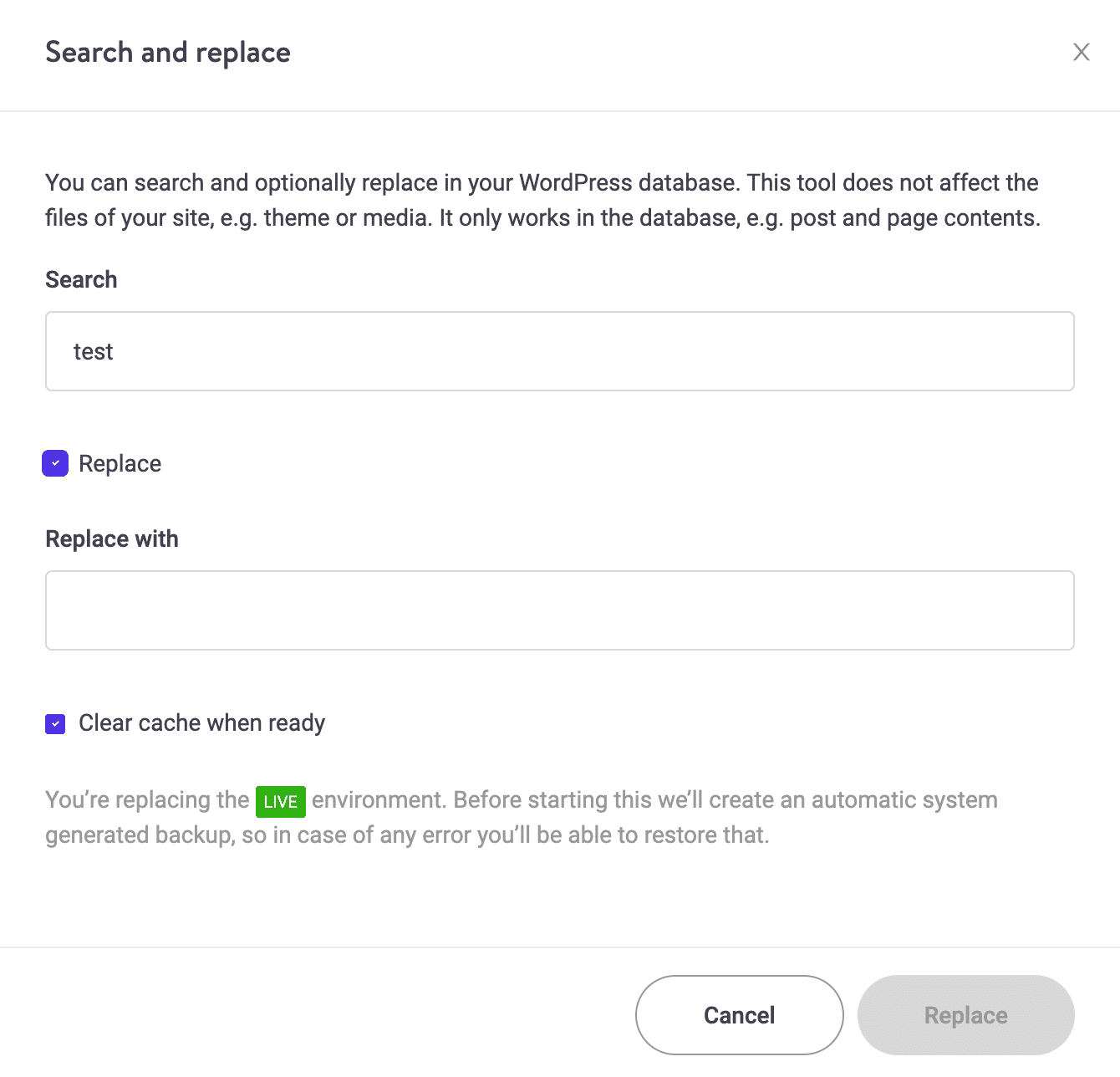 While it’s a minor change, it’s one that we got a lot of feedback about. We’ve added a new CDN indicator on the Sites list page. You can now easily see if you have the Kinsta CDN enabled on a site without having to dig down into the CDN page. 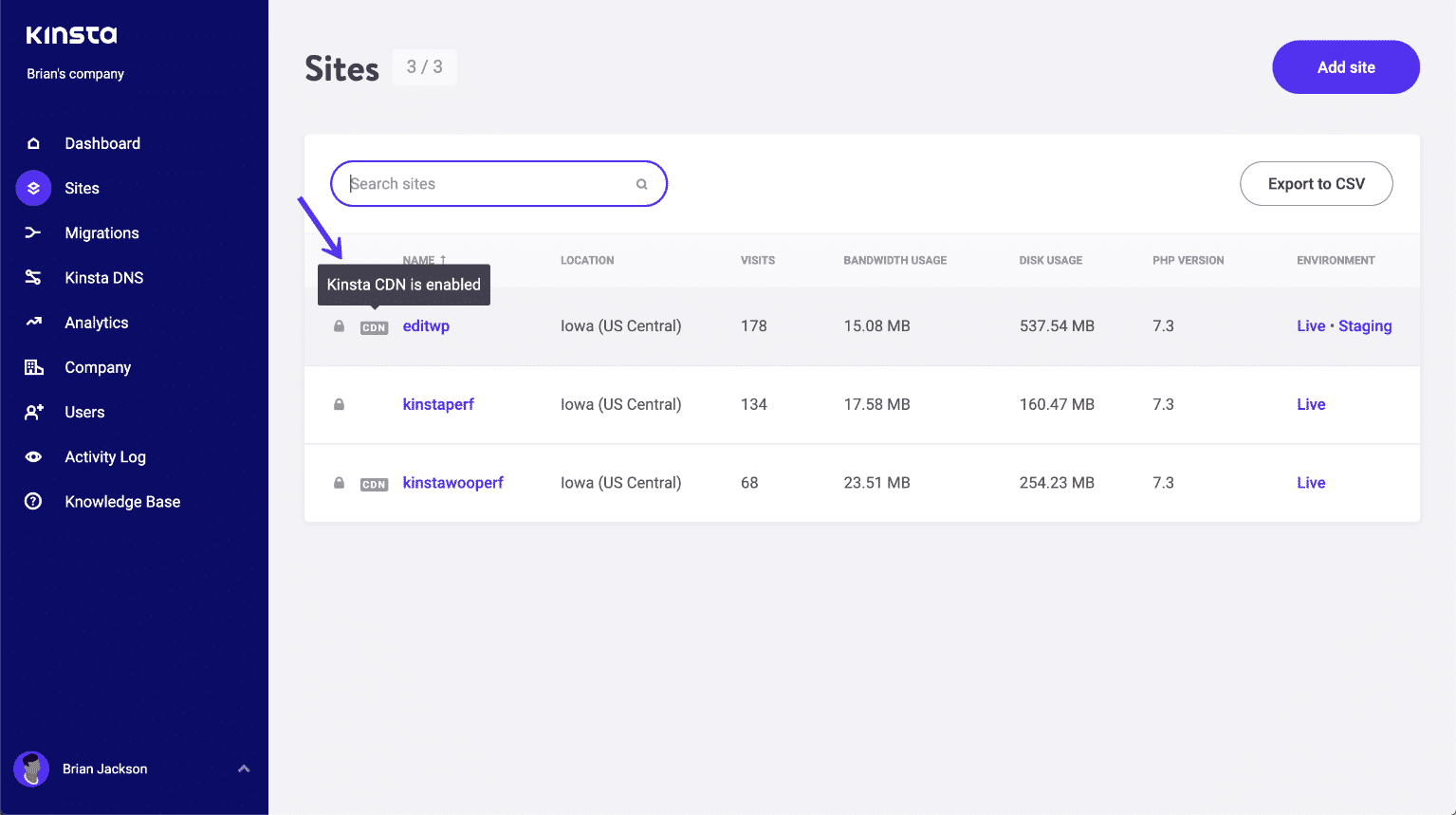 Join the Kinsta Beta Crew (Now Open to Everyone)

It would be awesome if we could ask a few questions or show you some of the new features before they go live so that we can hear your first impressions and collect feedback. This way you can have a real impact on how certain features might look or work in MyKinsta.

Previously we sent these invites out on a case-by-case basis, but we’re now opening it up to everyone!

Want to join? Click on your avatar and you’ll find a new option within the User Settings page. Scroll down and you can join the Kinsta Beta Crew. You can also leave the program at any time from here as well. 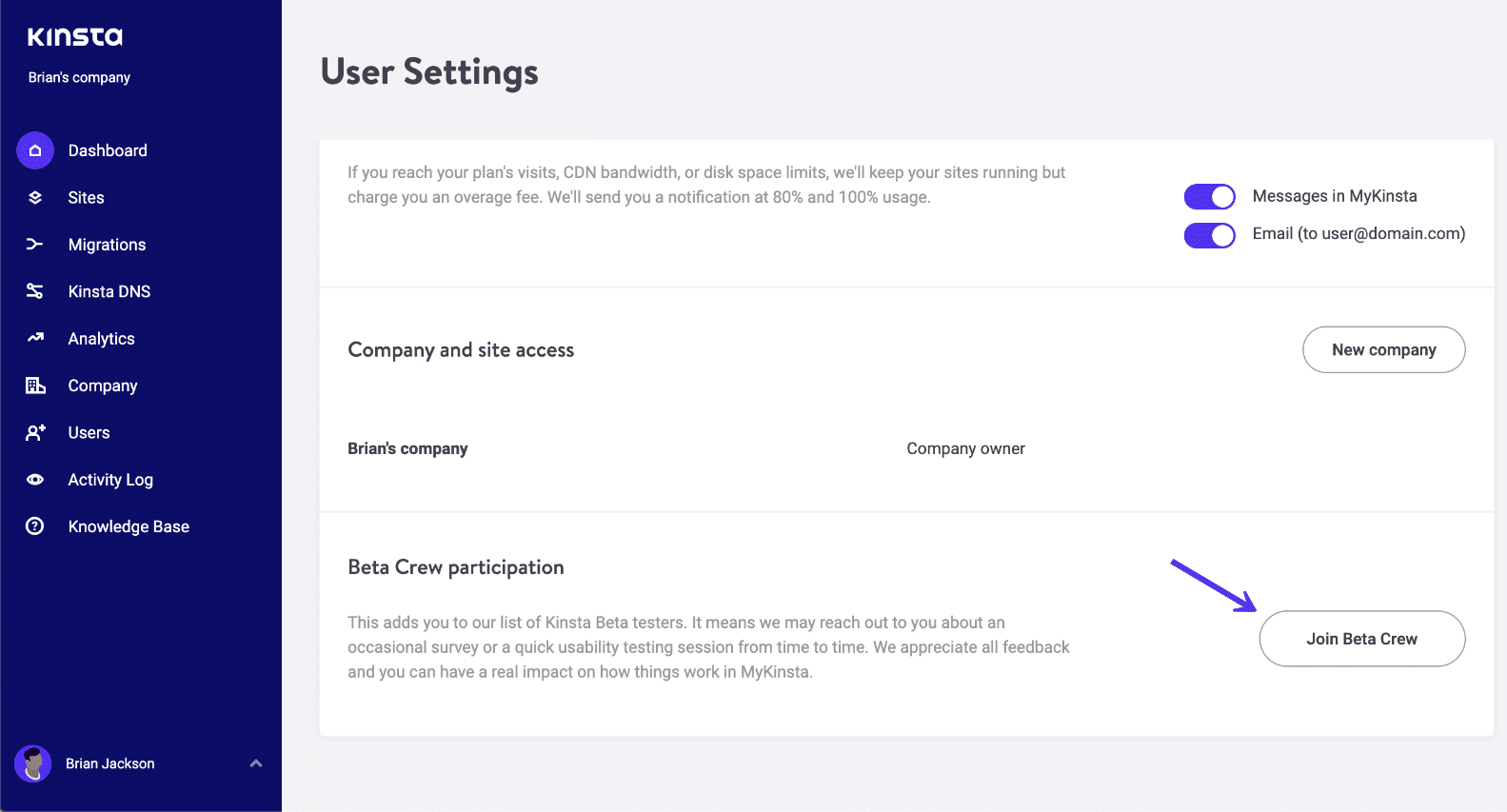 Backups are very important to us at Kinsta. In fact, we offer 6 different types of backups. This includes automatic backups, manual backups, system-generated backups, downloadable backups, hourly backups, and more.

We’ve updated and improved our backup restoration workflow screens to include additional information. This way you’ll know exactly what is going to happen before restoring a backup to live or staging. 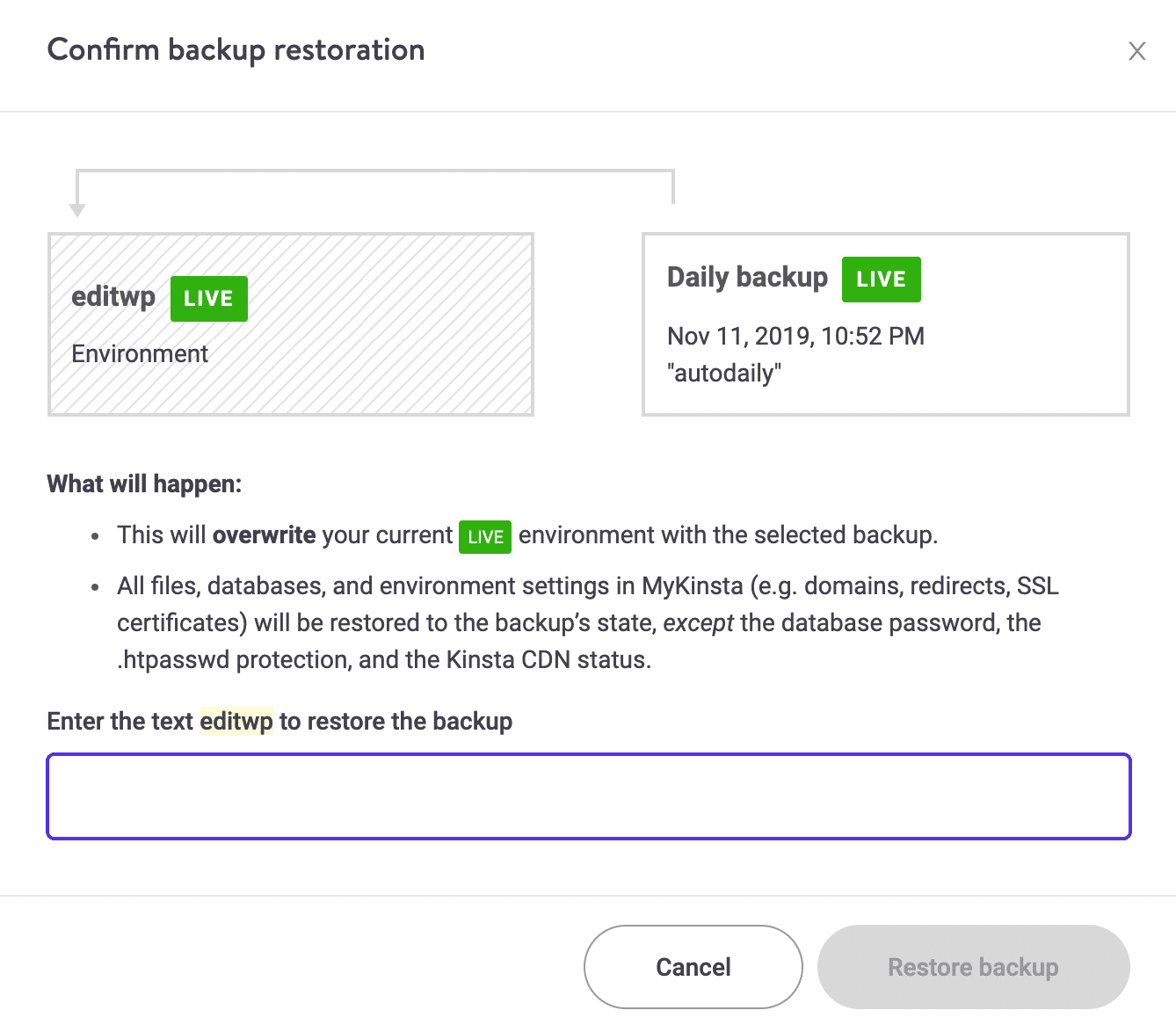 Below are a few additional improvements and changes we’ve made over the past couple of weeks.

If you’re using Kinsta DNS, you’ll be happy to know we’ve made a small change in how we treat the “@” symbol in regards to our DNS records. Typically most providers associate the “@” with the domain itself, so we have followed suit.

Previously there were three sections under the Info page regarding your connections:

We discovered that this was more confusing than it was helpful since the credentials for SFTP/SSH are the same. Therefore, we’ve combined these down into two simple sections. 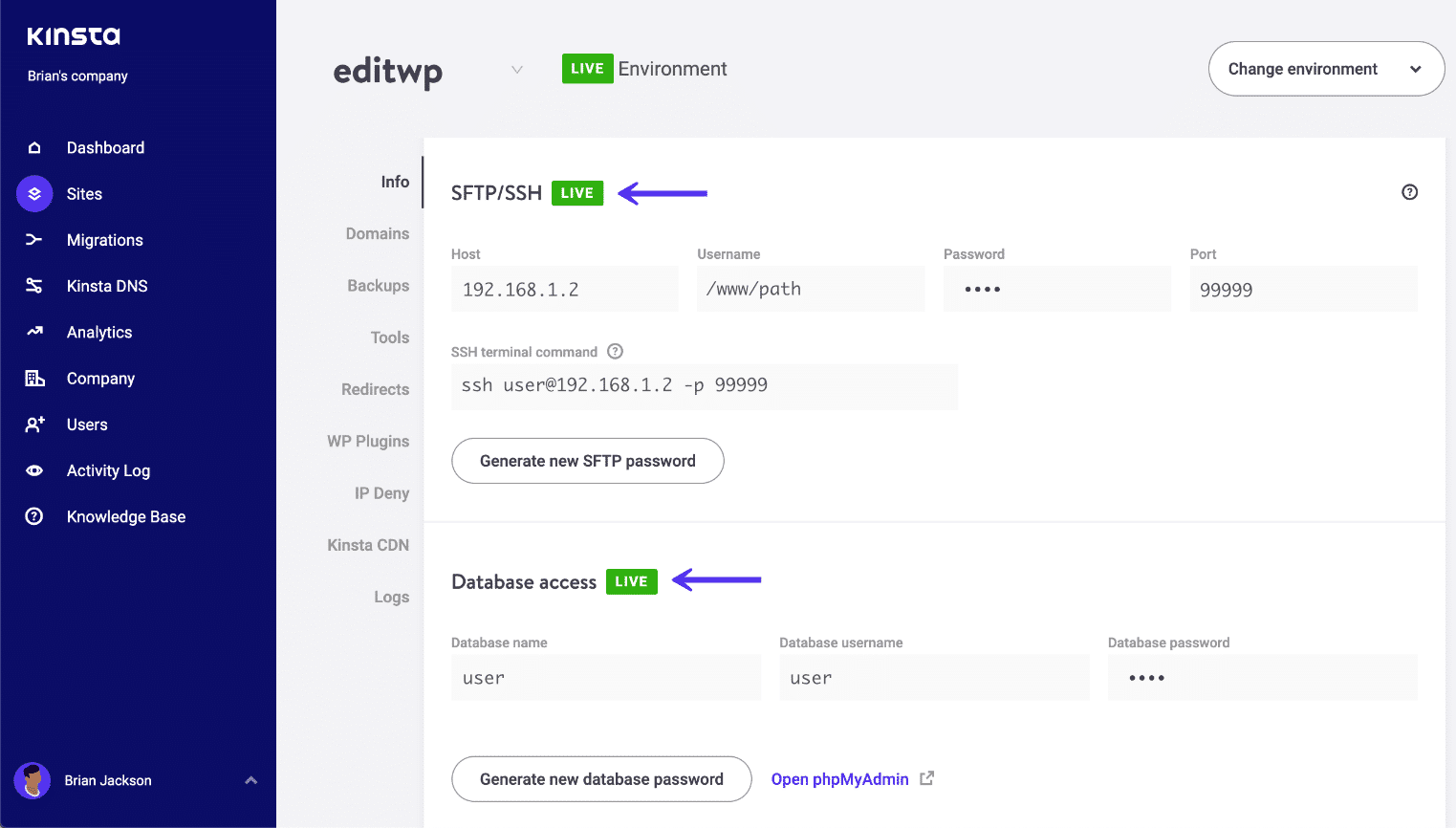 We hope all of these changes will help improve your daily workflow using MyKinsta. As always, please let us know if you have any suggestions or feedback. Stay tuned for the next feature update. 🤟