As an organization, Google needs little introduction. This online giant dominates nearly every corner of the internet – particularly since the introduction of the Google Cloud in 2008. This technology provides a wealth of different services, although it’s perhaps most notable for its hosting.

Fortunately, you don’t have to take these statements at face value. To back them up, we’ve put together a host of interesting facts about the market share Google Cloud currently holds, <em>and</em> its future prospects. Let’s get right to it!

So, just what is Google Cloud Platform?

Before we go any further, it’s worth explaining exactly what Google Cloud platform is. Put simply, it’s a suite of cloud computing services that runs on Google’s own robust infrastructure.

Through this cloud platform, Google offers an app engine, storage, domain name servers, and more. All of these resources are stored in Google’s data centers, which are strategically placed across the globe. This means you’re able to select the closest server to you – and provide a better service for your visitors as a result.

In addition, Google Cloud platform also offers hosting solutions. This is commonly known as Google Cloud Hosting, but can also be referred to as the Compute Engine depending on the specific services being discussed.

Since there are so many branches to Google Cloud platform, it can be difficult to accurately work out its market share. As a starting point, we can look at the market share it currently holds in the hosting industry, using data collected by W3 Techs: 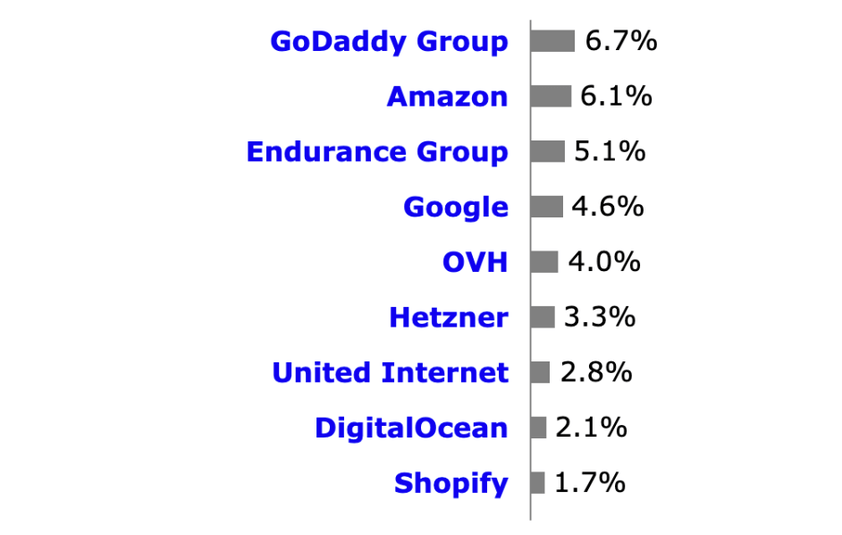 As you can see, a 4.6% market share means that Google comes in fourth place, just behind Amazon, GoDaddy, and Endurance Group (and right above OVH). Although fourth place is impressive enough, it’s worth noting that Google hits this mark in a list of well over 100 other hosting platforms.

In doing so, Google Cloud beats out plenty of well-known businesses, many of which have been around for a long time. This is no easy feat, especially considering the fact that Google Cloud isn’t a dedicated hosting company.

To better demonstrate just how much of the market 4.6% represents, we can turn to the data collected over at BuiltWith. Using this resource, you can find out how popular a given site or service is within specific categories, or just gain a general sense of its usership.

According to BuiltWith, there are currently about 8,111,799 live websites using Google Cloud hosting 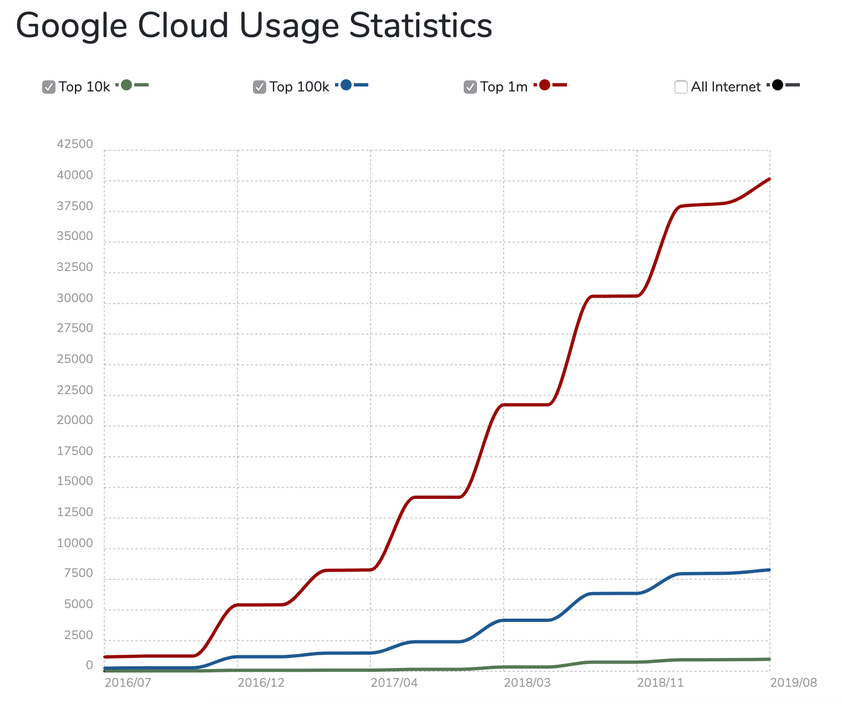 Among them you’ll find plenty of large and business-focused sites, including Wix, History101, and Poshmark. You’ll even find our very own website there. In early 2016, we here at Kinsta made the decision to move our entire infrastructure to Google Cloud platform.

Additional data gathered by BuiltWith shows that Google ranks third place for cloud hosting among the top 100k sites on the web – beaten only by Amazon and Cloudflare: 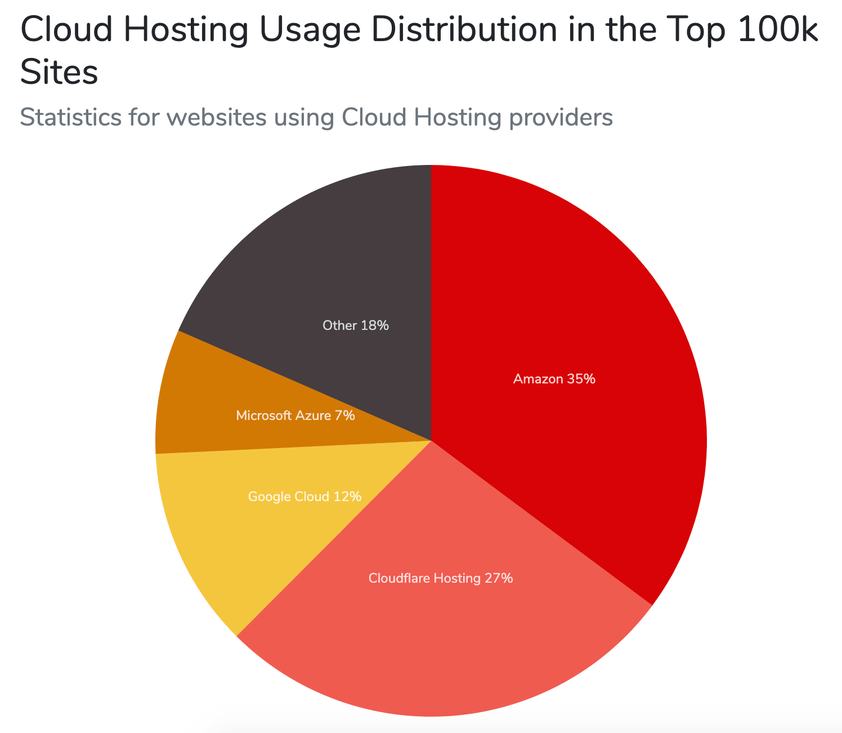 As it offers so many services, it can be hard to pinpoint the primary reason for Google Cloud’s popularity. Naturally, the Google name doesn't hurt. However, it also helps that cloud solutions in general are on the rise.

For instance, SADA Systems recently surveyed 200+ IT managers about their use of public cloud services. They found that 84% of IT managers are using public cloud infrastructure today, as opposed to corporate data centers.

Will cloud solutions like Google’s continue to grow in popularity?

Of course, we can’t see into the future. However, most data suggests that solutions like Google Cloud will continue to grow in popularity. For example, Cisco forecasts that by 2020, cloud traffic will represent 92% of all data center network traffic.

In fact, this change is already starting to become noticeable. Some of the world’s largest companies are now using Google Cloud Platform – including Spotify, Snapchat, HSBC, Coca-Cola, Feedly, and Sony Music. eBay also recently began exporting 1B+ items in its live catalog to Google Cloud.

Even Apple has been seen moving some of its services away from Amazon’s platform. In fact, it’s estimated that the company has spent somewhere between $400 million and $600 million on Google Cloud platform. More publicly, Apple use the Google Cloud to store data connected to its own iCloud services.

Perhaps the most well-known switch was the 2016 decision by Evernote to move its 200 million users over to Google Cloud platform. Ben McCormack, VP of Operations at Evernote, stated at the time: “Evernote will gain significant improvements in performance, security, efficiency, and scalability. Moving to the cloud also allows us to focus time and resources on the things that matter most.”

Put simply, Google Cloud platform is incredibly popular right now, and doesn’t show any signs of slowing down. To better understand its popularity, just take a look at its performance on Google Trends:

As you can see, interest surrounding Google Cloud platform has been on a steep rise over the past couple of years. No doubt this has a lot to do with the fact that it offers flexible and budget-friendly services, backed by one of the most powerful companies on the planet.

We’ve looked at how Google Cloud compares to its competition in a general sense. However, it’s also worth looking closely at the relationship between it and its closest competitor – Amazon Web Services (AWS).

These two platforms have quite a bit in common. They are managed by two of the largest online companies in existence, and each offers cloud-based web hosting alongside a selection of other services. Both platforms are also more than ten years old, although they’ve evolved and expanded a great deal over the years.

As we saw earlier, AWS has a larger market share than Google Cloud – 6.1% of the web hosting market vs. 4.6%. Its edge is particularly strong when it comes to large and popular sites. For example, AWS holds 35% of the market share for cloud hosting among the top 100,000 sites on the web, compared to Google Cloud’s 12%.

However, while AWS is the reigning champion, Google Cloud is making up ground quickly. To see what we mean, take a look at the two platforms’ growth over the past year:

AWS has remained relatively steady, with a few small ups and downs. On the other hand, Google Cloud’s market share has grown from 3.5% to 4.6% in the same time period. This suggests that, while it currently can’t compete with AWS’s numbers directly, it’s likely to become a much more significant competitor over the next few years.

Of course, Google and Amazon aren’t the only big names who’ve gotten involved in the web hosting business. Microsoft offers its own cloud platform – Azure – which offers hosting services (although it isn’t a primary focus).

Microsoft’s overall share in the hosting market is fairly low, just 1.0% according to the W3Techs data we looked at earlier. It fares a bit better when you look at the web’s largest sites in particular, especially in terms of the top 10,000 sites: 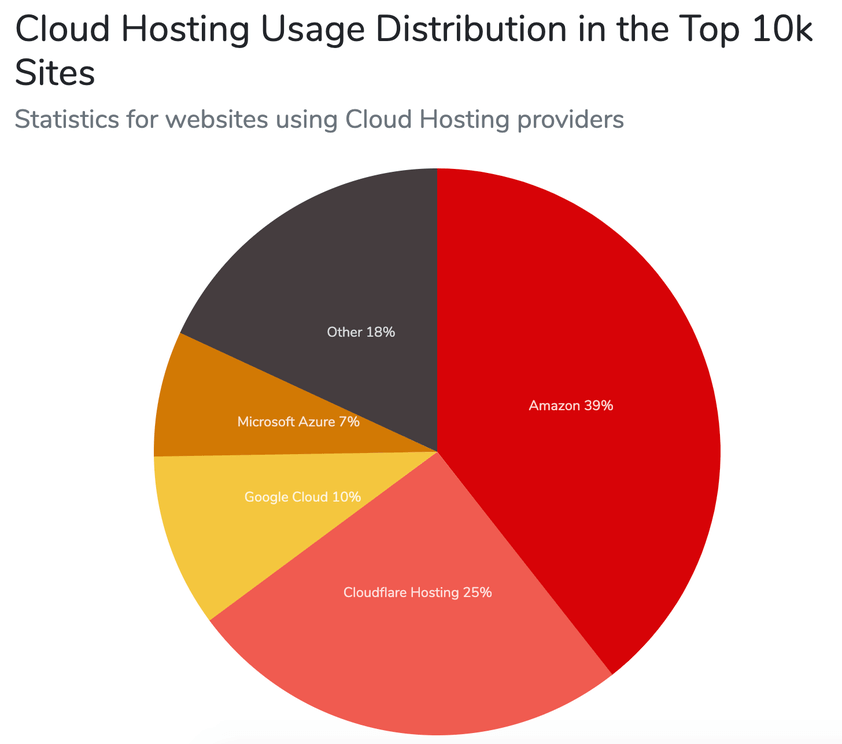 At 7% market share, Azure lags just a bit behind Google Cloud in this category. However, in all others, there’s a more significant gap. In other words, Google Cloud has already well surpassed Azure in terms of interest and market share, and doesn’t seem likely to lose any ground in the near future.

Is it time to join the likes of Apple and Spotify?

If you’re a WordPress user looking for a secure and cost-effective hosting solution, we at Kinsta offer managed hosting powered by Google Cloud platform. This offers you the best of both worlds – powerful, secure, and stable hosting designed to take your WordPress site to the next level!

Are you ready to get started? We offer one-click WordPress installations so you can get up and running in no time.