Network Latency – Comparing the Impact on Your WordPress Site 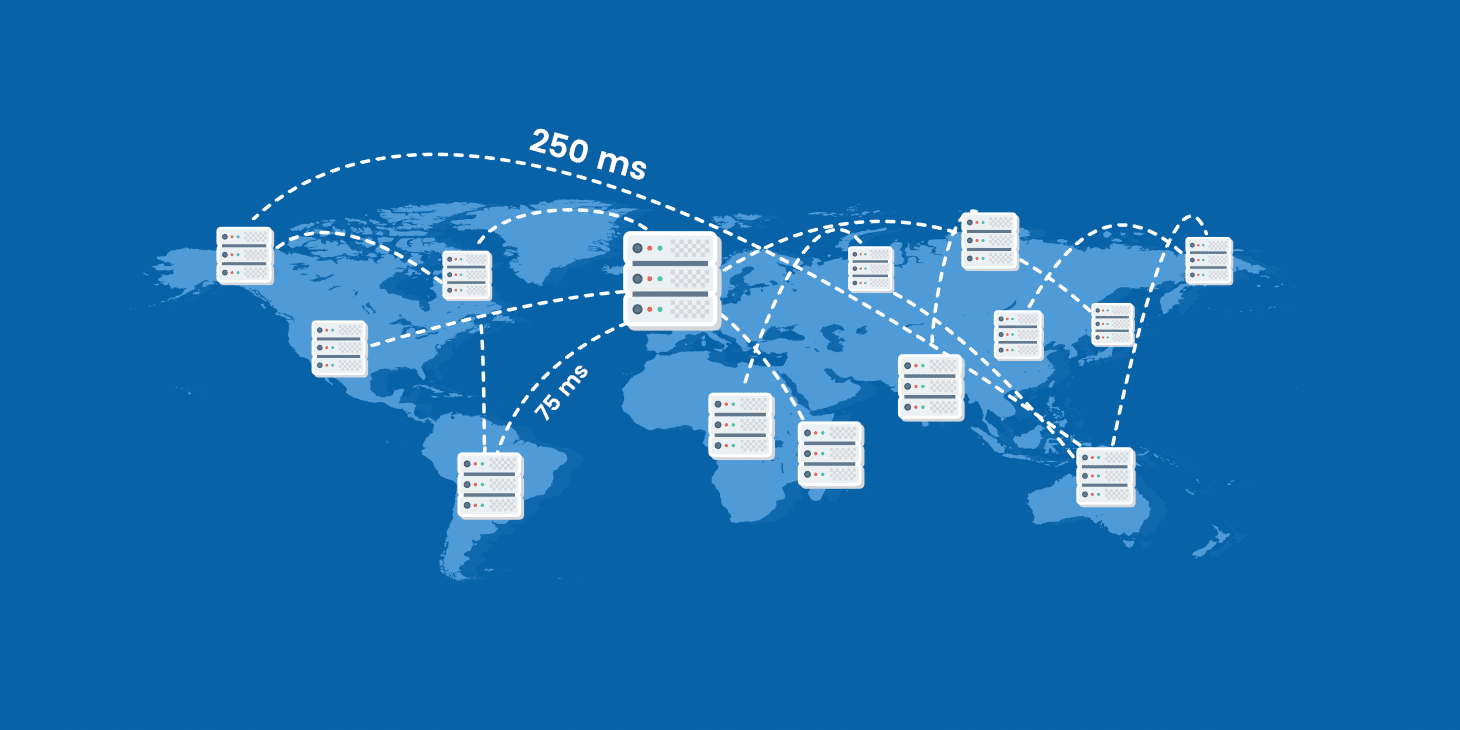 A lot of articles around the web tend to primarily focus on front-end WordPress optimizations and quick ways to speed up your site. Server optimizations such as network latency are sometimes neglected or overlooked. Because of this, we thought it would be interesting to take a deeper look at the importance of network latency and the impact it has on your WordPress site when loading different regions. While a CDN can definitely help decrease network latency, your host server location is still very important, especially if you are serving visitors in a very specific geographical location. Latency matters and we’ll show you a couple reasons why.

What is Network Latency?

Network latency refers to the time and or delay that is involved in the transmission of data over a network. In other words, how long it takes for a packet of data to go from one point to another. Nowadays this is typically measured in milliseconds, however, it could be seconds depending upon the network. The closer to zero the better.

“Latency is the wait time introduced by the signal traveling the geographical distance as well as over the various pieces of communications equipment.” – Whatis.com

In other words, the further the distance the greater the latency, which equates to a longer delay. You can’t beat the speed of light when it comes to data traveling over fiber optic cables. For example, below is a map of the Google Cloud Platform network. They have thousands of miles of cable going underneath the ocean spanning the entire globe. This is one reason why it is one of the fastest networks in the world. And even with this extensive state of the art network, there’s still always going to be latency delays.

There are a couple different factors that contribute to network latency delays, which includes:

Why Network Latency is Important

Some might argue that network latency isn’t very important, however, it can be in regards to where you choose to host your WordPress site. For media and your assets (such as images, JavaScript, CSS, Video), a CDN can fix a lot of the extra latency involved, by delivering a copy from a closer server. However, in most configurations, you still have to query your hosting server for the initial DOC load. And this is why latency matters!

The Trainline reduced latency by 0.3 seconds across their funnel and customers spent an extra £8 million (~$11.5 million) a year. – WPO Stats

Latency is especially important when it comes to businesses that serve visitors in a specific geographical location. For example, let’s say you have an e-commerce shop in Sydney, and 90% of your customers are from Australia. Your business would definitely benefit from placing your site on a server in Australia, vs hosting it in Europe or the United States. We’ll go into just how much it impacts your site below.

Distance is one of the primary reasons for latency delays. However, it is important to remember though that latency is not only affected by distance, but also by the number of hops it makes, routers in between, etc. A few ways to measure network latency include Ping, Traceroute, and MTR. In this example, we are simply going to use ping times and run a few traceroute tests. If you really want to dig into the data, you can run traceroute commands.

We the utilized KeyCDN’s free Ping Test tool which allows us to test simultaneously from 14 locations. Remember, the lower the ping time the better as this directly correlates with the delay time (in milliseconds) for how long it takes the data to travel across the internet, to its destination address, and then back to you. We also utilized their traceroute tool. 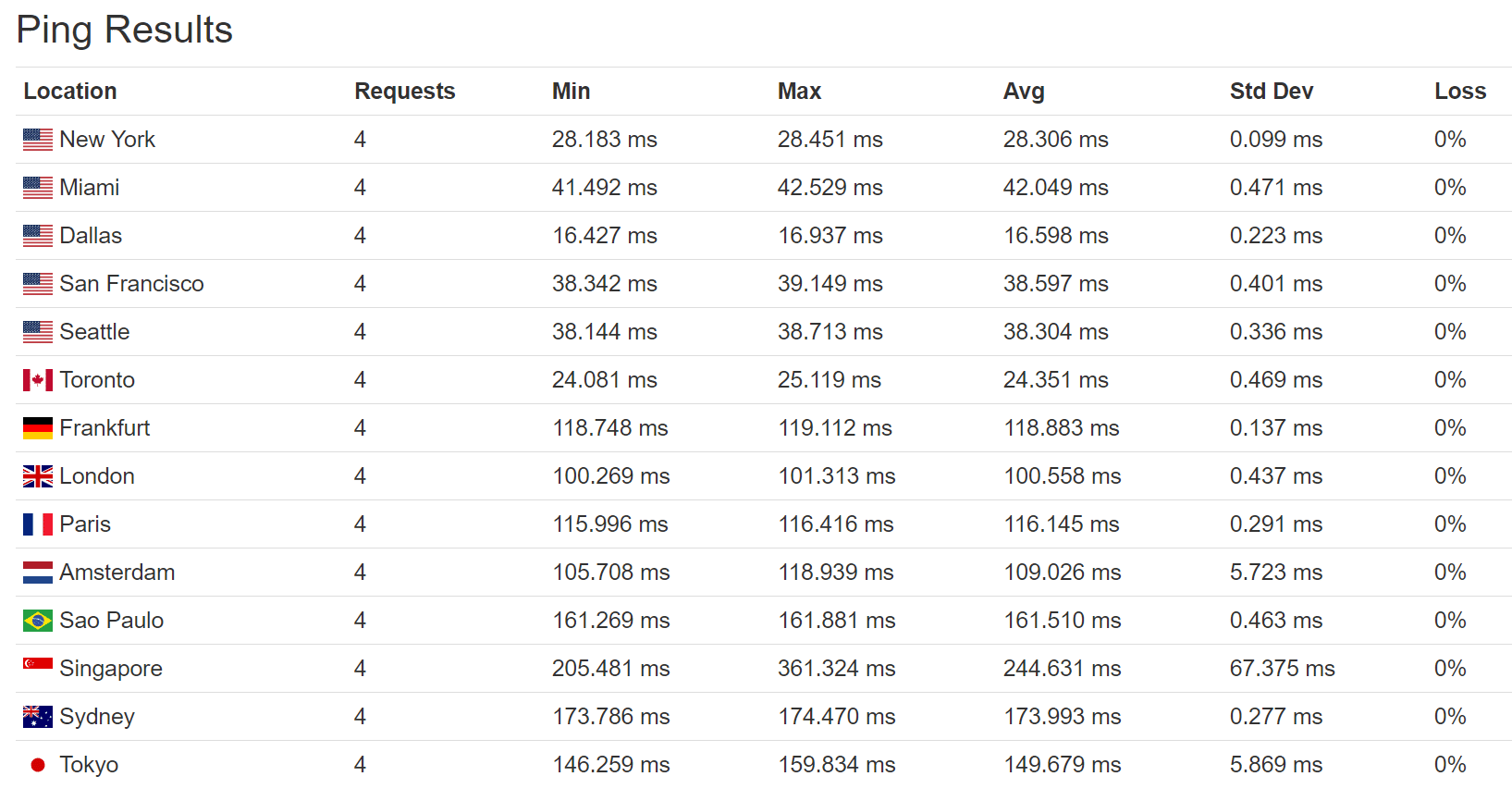 And if we compare the Traceroute, you can see an example 7 additional network hops are needed to simply travel from Iowa, USA to Frankfurt, Germany (compared to 10 hops from Dallas). This is why it is important to remember, that network hops also factor into network latency. 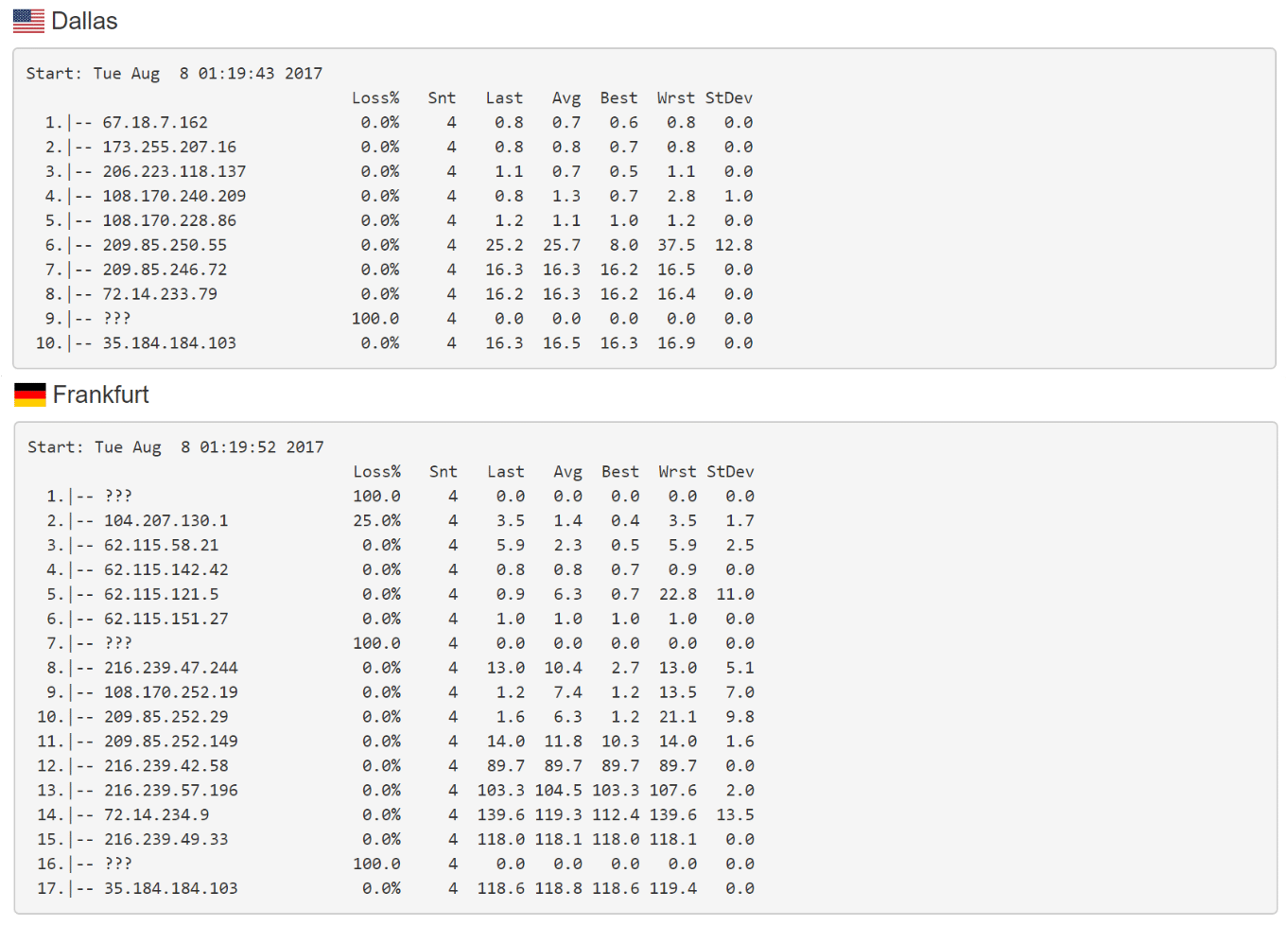 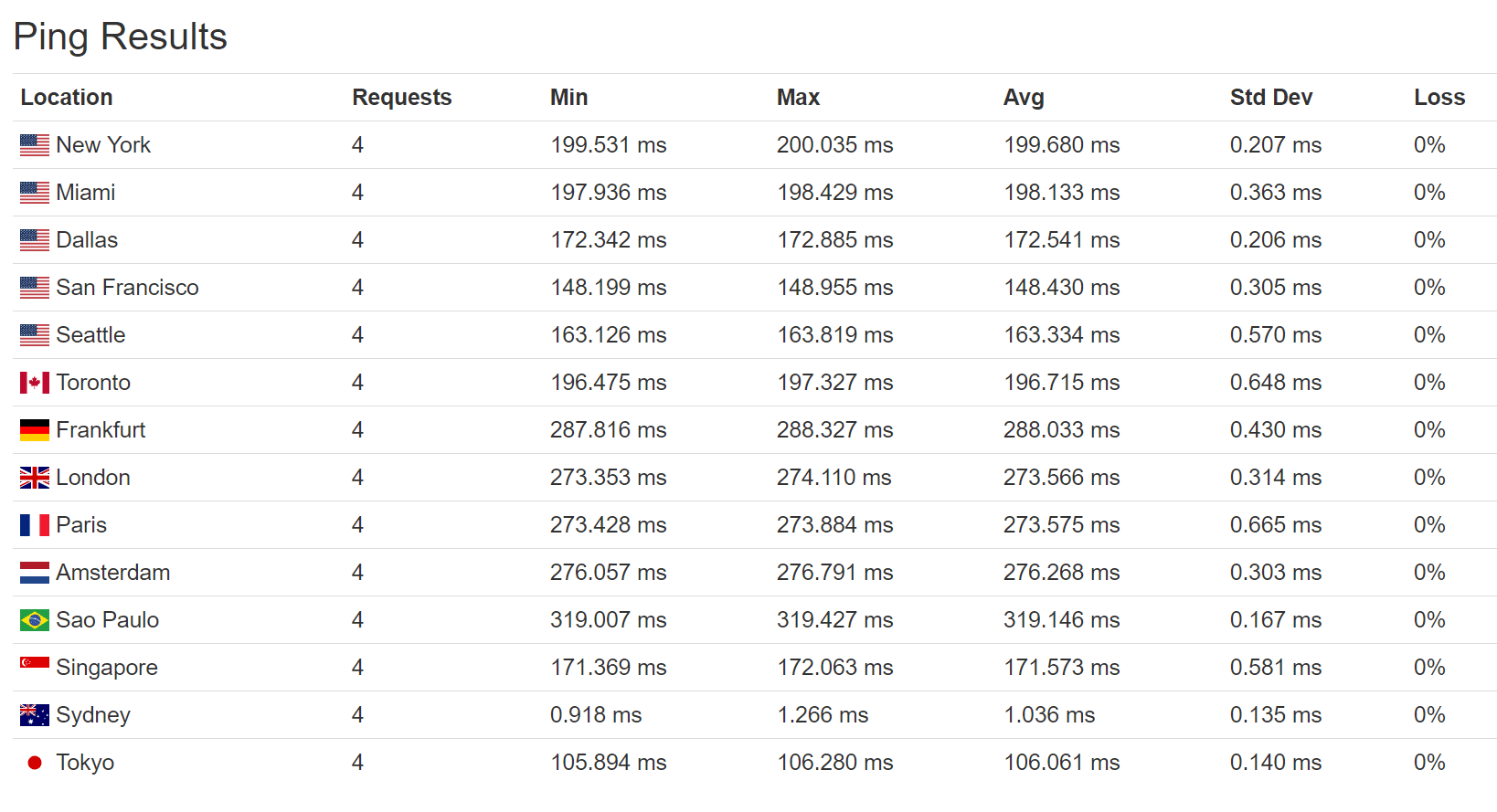 And if we compare the Traceroute, you can see an example 14 additional network hops are needed to simply travel from Sydney, Australia to Frankfurt, Germany. 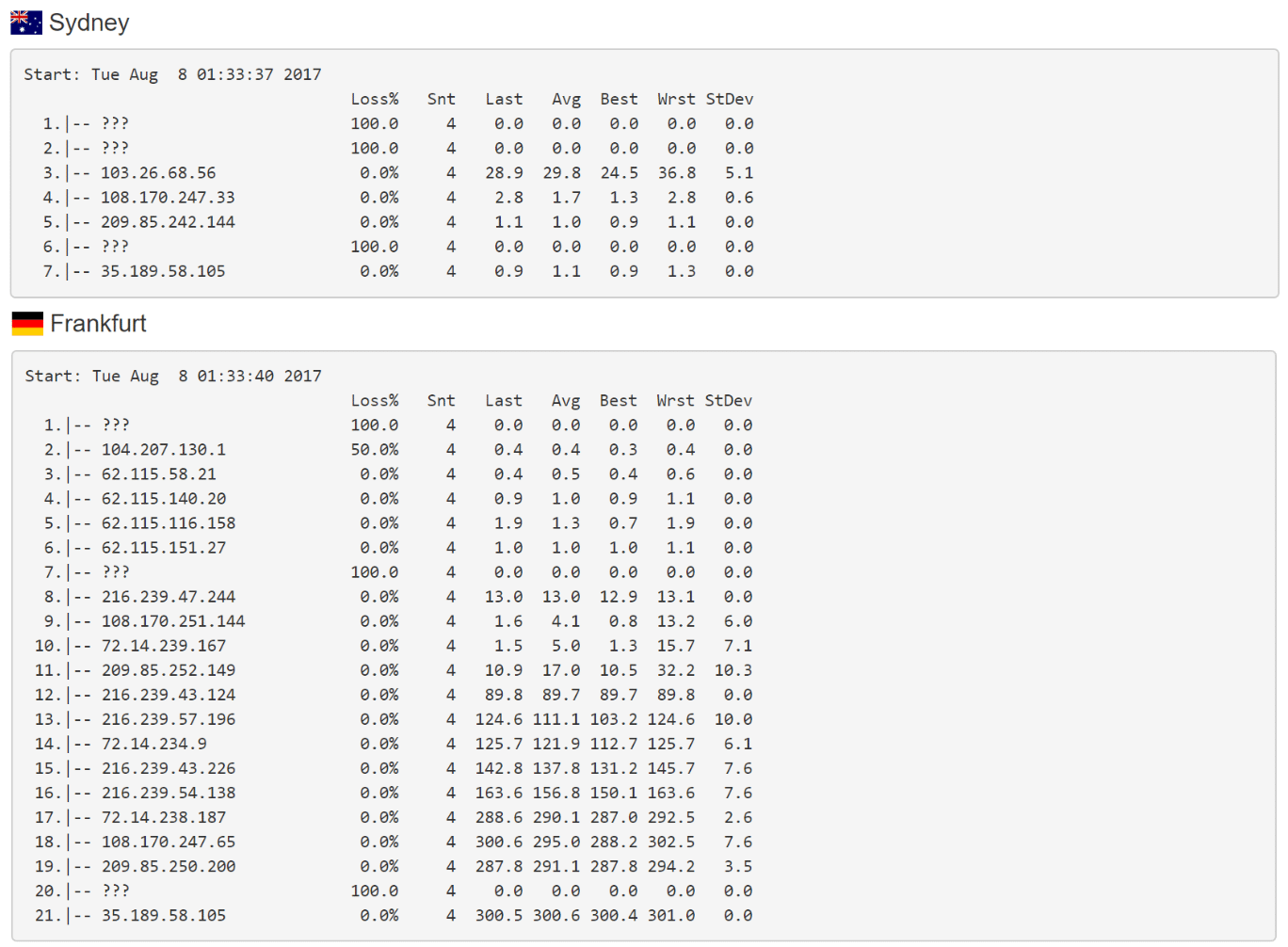 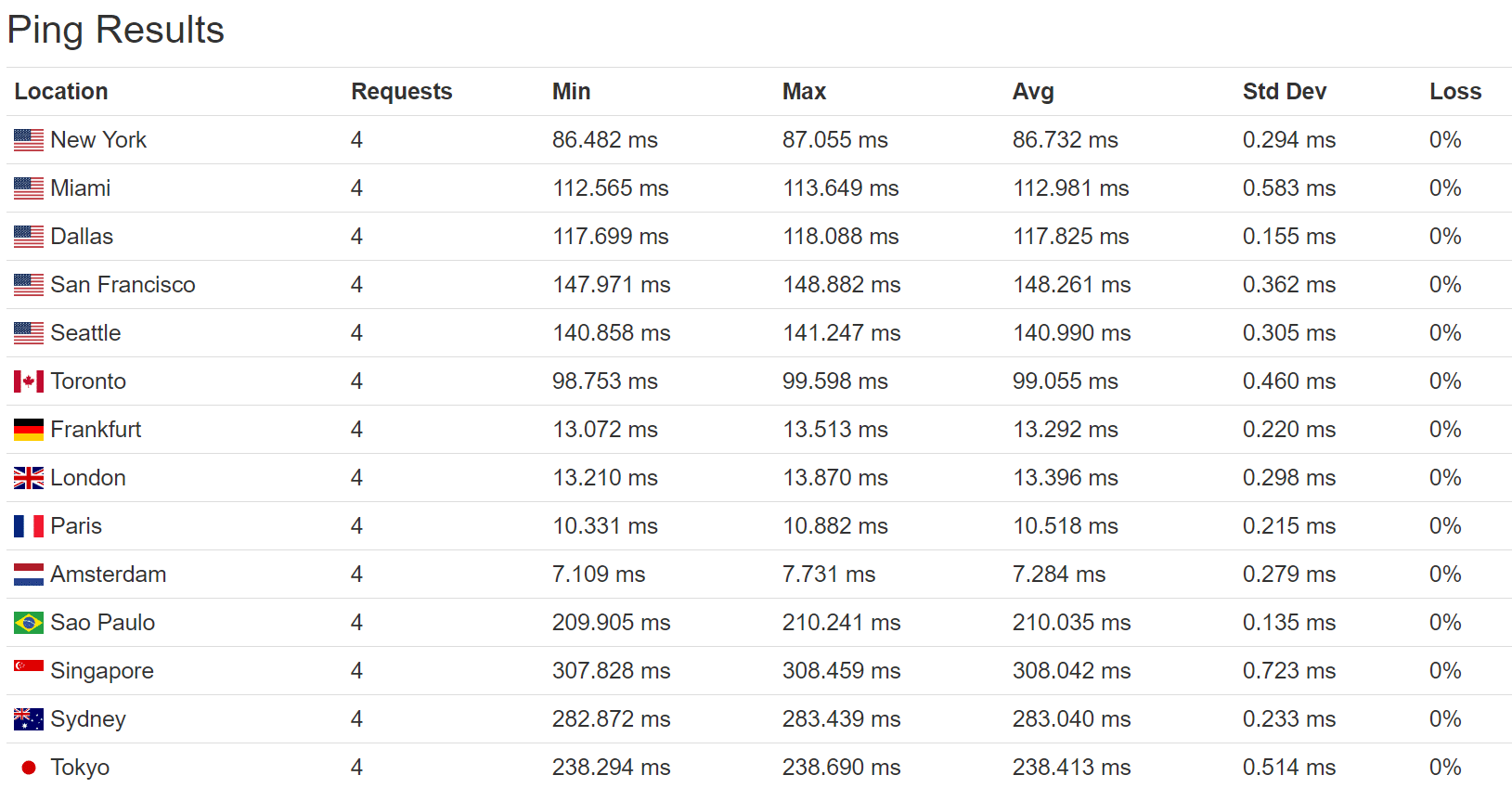 And if we compare the Traceroute, you can see an example 11 additional network hops are needed to simply travel from Frankfurt, Germany to Sao Paulo, Brazil. 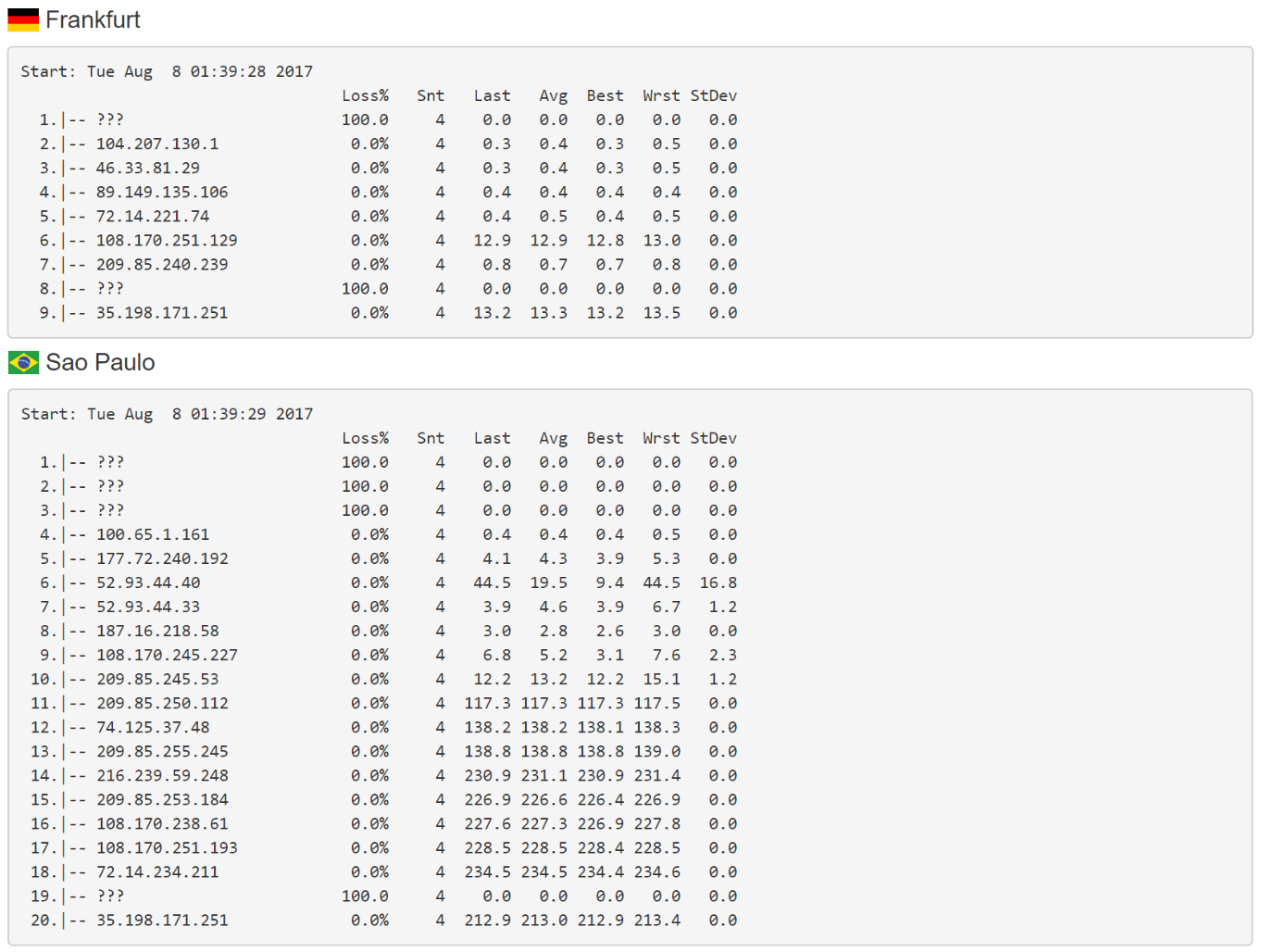 So as you can see above, the greater the distance directly correlates with higher ping times and additional network hops which make up network latency. This is why you should strategically position your WordPress site to decrease both of these factors.

Above we are testing Ping times from where the servers are located, in correlation with the ping servers. But what about latency between Google Cloud Platform regions themselves? Geek Flare ran a great test between 9 of the different regions. This can give you a quick overview of the delay that happens due to latency when placed in one region versus another. 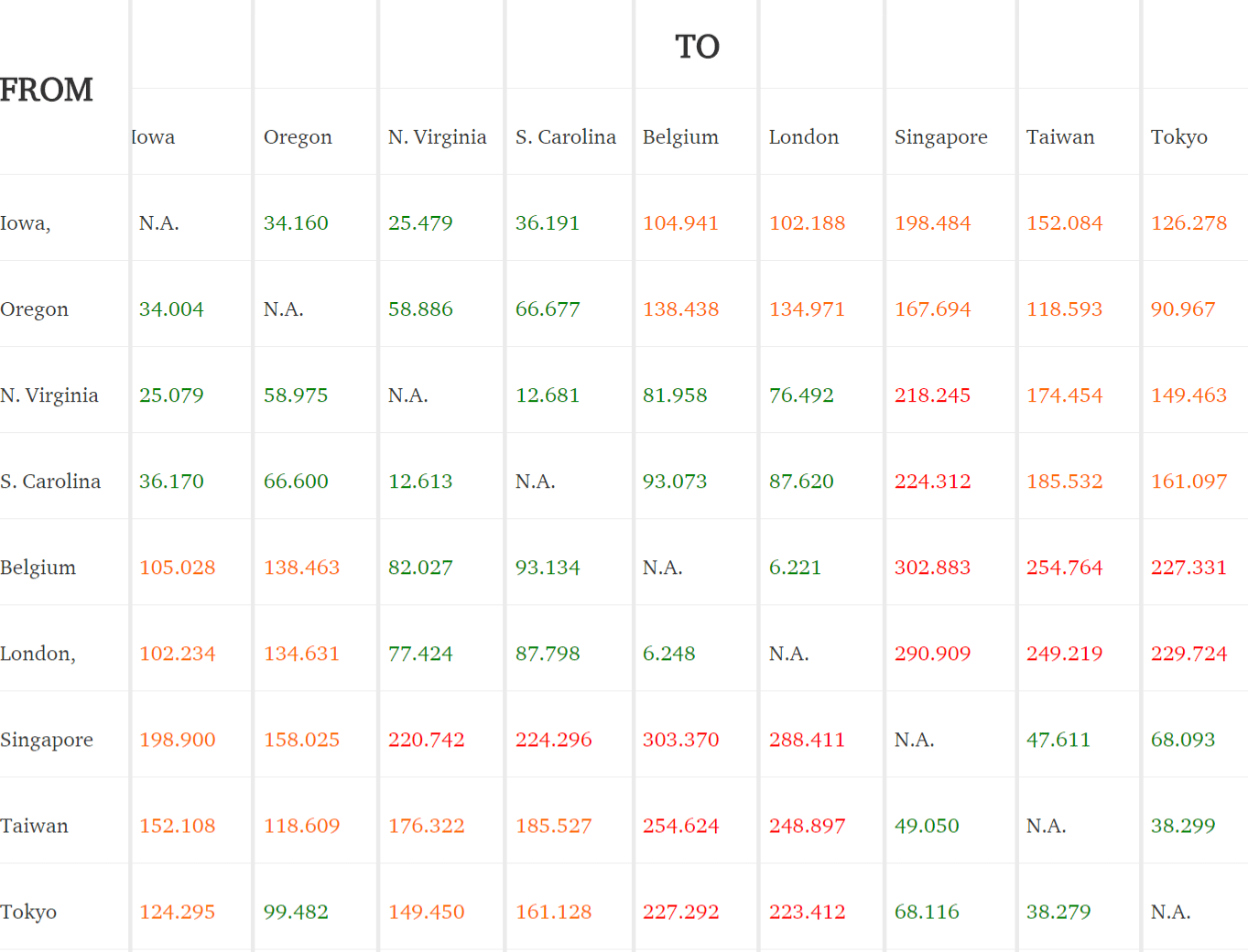 Make sure to also check out our article on Google Cloud vs AWS to see differences in network latency.

And of course, we leave out the total page load times. In fact, this is where some of the most interesting data is. However, remember that this includes other factors such as TTFB. All three test sites are identical, running a fresh install of WordPress, with the Twenty Seventeen theme installed. We are also utilizing Pingdom, so the times are being measured from their test server locations.

We ran speed tests from three different test locations with our server located in Iowa, USA, and below are the results.

As we can see above, there is a huge difference between loading a site from within the United States (close to the hosting server) and loading from across the globe.

We ran speed tests from three different test locations with our server located in Sydney, Australia, and below are the results.

As we can see above, there is a huge difference between loading a site from within Australia (close to the hosting server) and loading from across the globe.

We ran speed tests from three different test locations with our server located in Frankfurt, Germany, and below are the results.

As we can see above, there is a huge difference between loading a site from within Europe (close to the hosting server) and loading from across the globe.

If those page load tests don’t convince you, we don’t know what will! For example, the test site in Iowa, USA, took only 368 ms to load from Dallas. But it took 2.14 seconds to load from Sydney, Australia. This is why location matters! And again, you can help decrease the total load times by putting your media assets closer to your visitors with a CDN. Kinsta includes a CDN for all clients! But you will always encounter load time and latency from your host server, so choose wisely.

Choosing the Right Location to Host Your WordPress Site

Most WordPress hosting providers typically allow you to choose from different locations to host your site. Here at Kinsta, we have all 20 Google Cloud Platform locations now available. This lets you strategically place your site where you need to ensure low latency and TTFB, along with blazing fast load times. You can also choose a different location for each separate site. 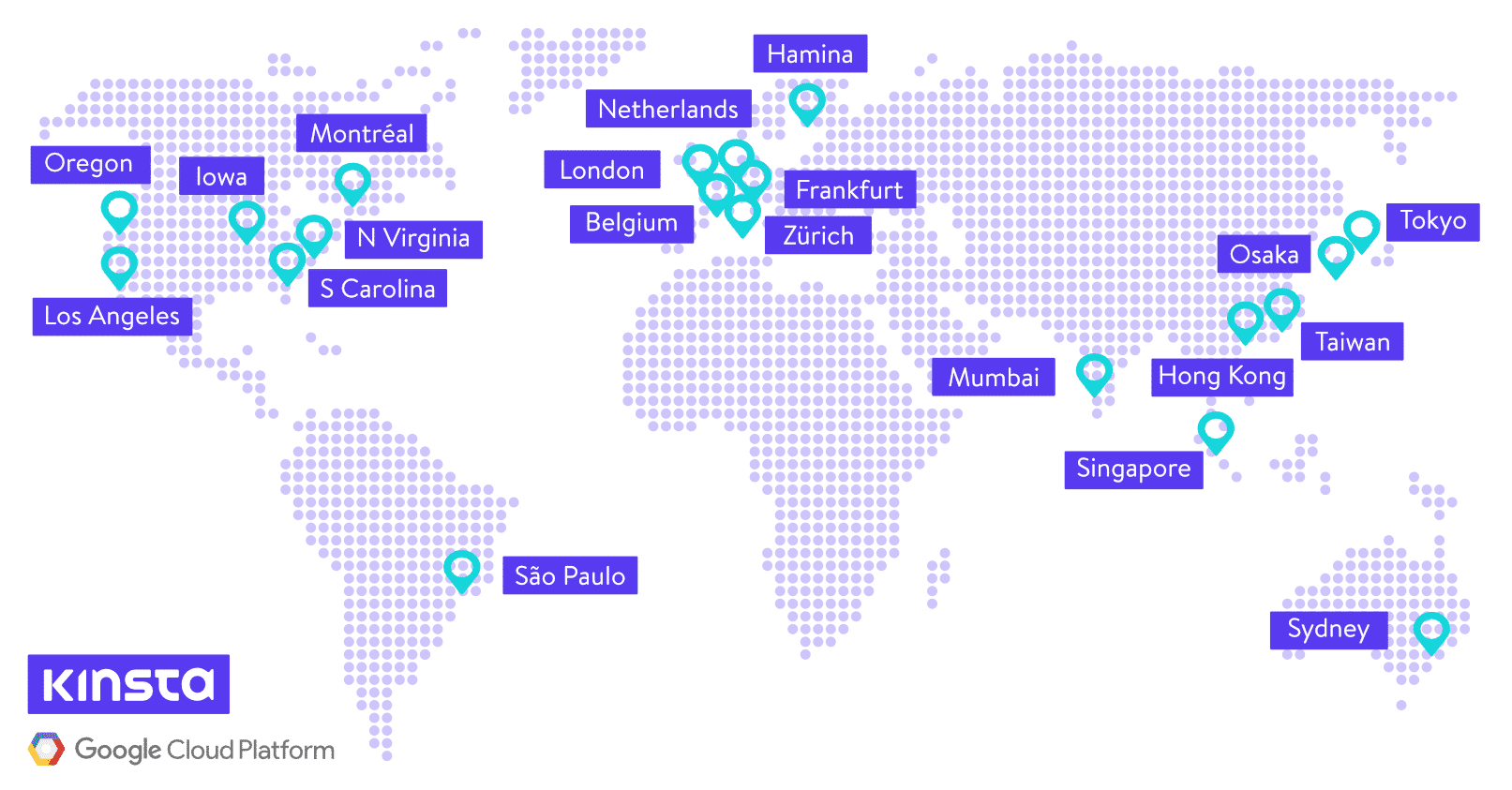 Not sure which one to pick? Here are a few tips below.

One of the very first things you can do is look at the geographical location of your visitors in Google Analytics. In this example below, you can see that over 90% of the traffic is coming from the United States. So in most cases, you would want to place your WordPress site on a server in the United States. You could filter down the data to cities, but we would typically recommend a central location like Iowa, USA. 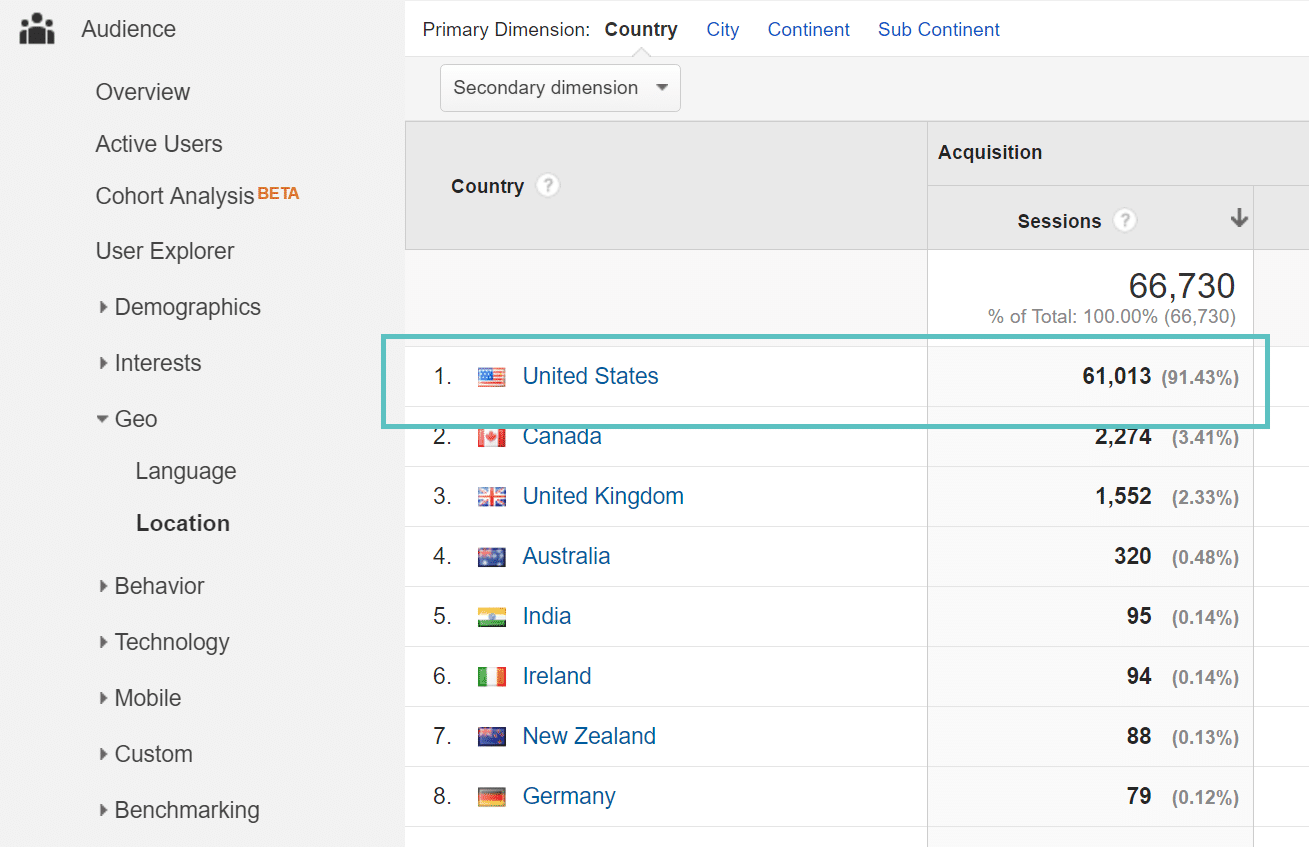 If you run an e-commerce store, make sure to also check to see where your customers are coming from. This is of course how you generate revenue, so these are your most important visitors. This should coincide with your traffic above, however, this is not always the case. If you have e-commerce data setup or Goals, you can easily overlay that information on top of the Geo data to make a more informed decision.

Tip 3 – Do a Quick Latency Test

There are a lot of handy free tools out there to measure latency from your current location for different cloud providers. This can help you quickly evaluate which region might be the best choice for your site. 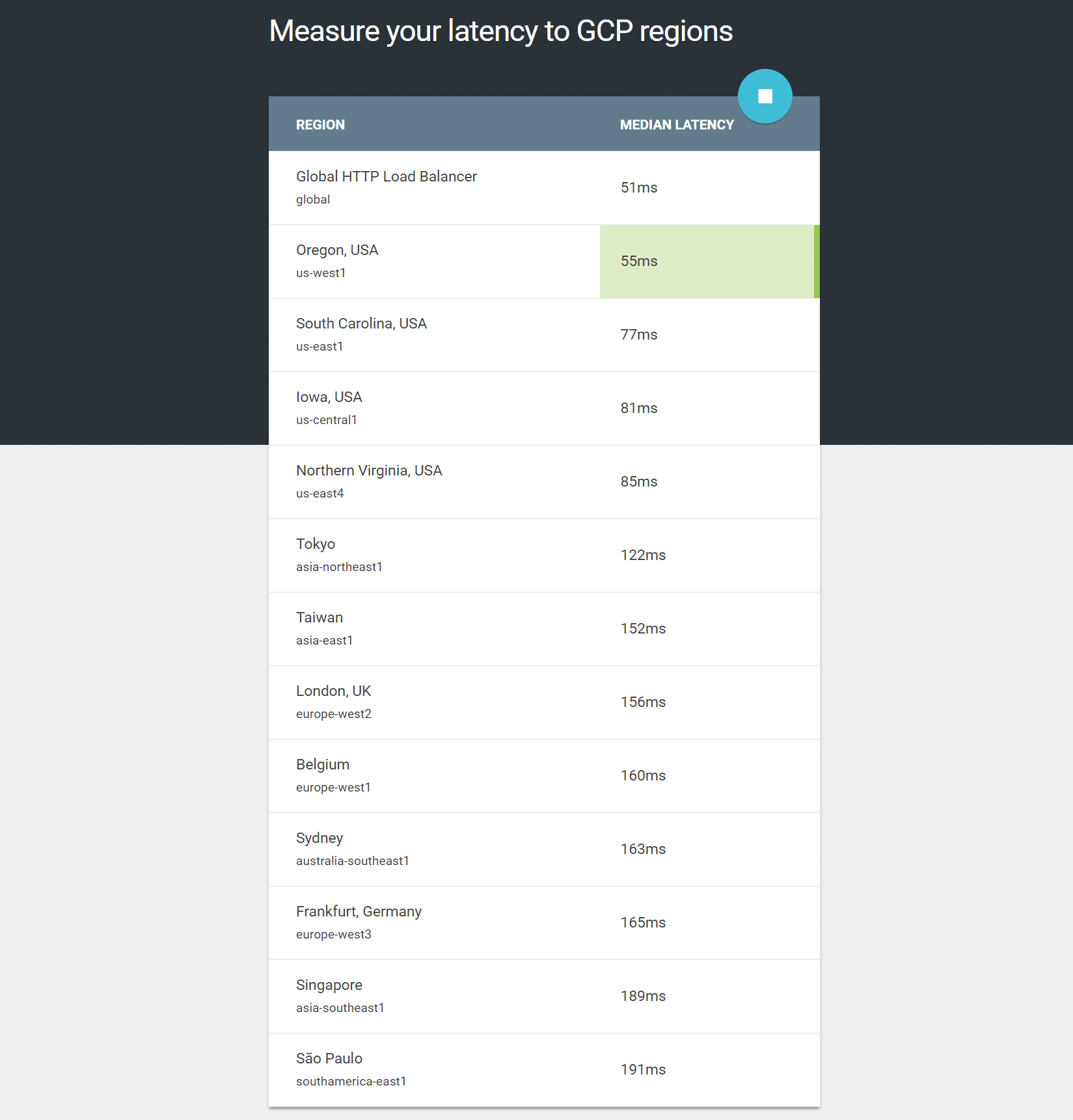 You can also utilize CloudHarmony, which is a cloud comparison tool. You can test things such as latency, DNS, uplink, and downlink. 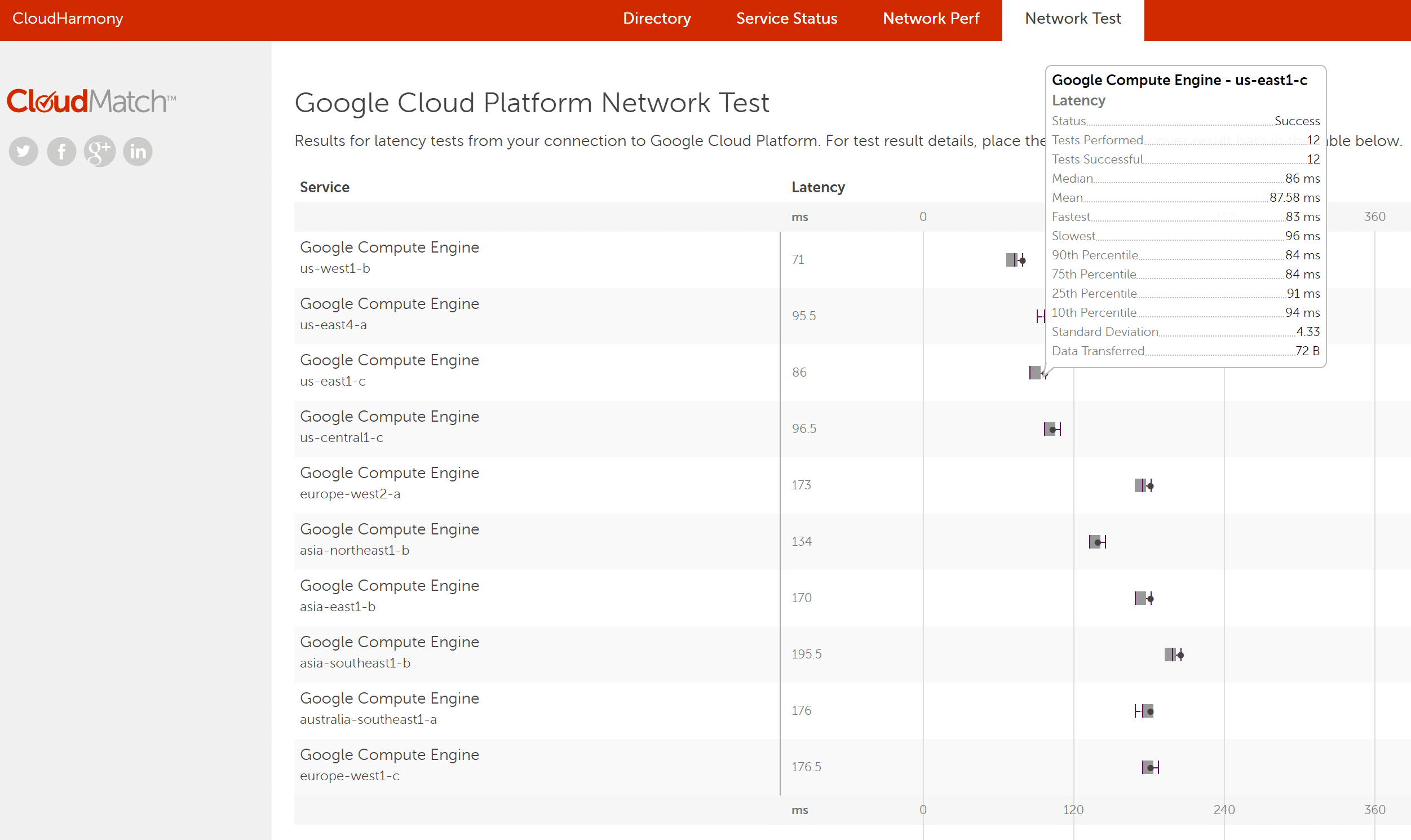 Hopefully, now you understand a little more about network latency, why it matters, and how it impacts your WordPress site. To ensure fast load times make sure to choose a server with your host that is closest to your visitors and customers. What are your thoughts? Have you ever experienced slow load times due to a website being placed in the wrong location? Let us know below in the comments.

1.8K
Shares
If you enjoyed this article, then you'll love Kinsta’s WordPress hosting platform. Turbocharge your website and get 24/7 support from our veteran WordPress team. Our Google Cloud powered infrastructure focuses on auto-scaling, performance, and security. Let us show you the Kinsta difference! Check out our plans 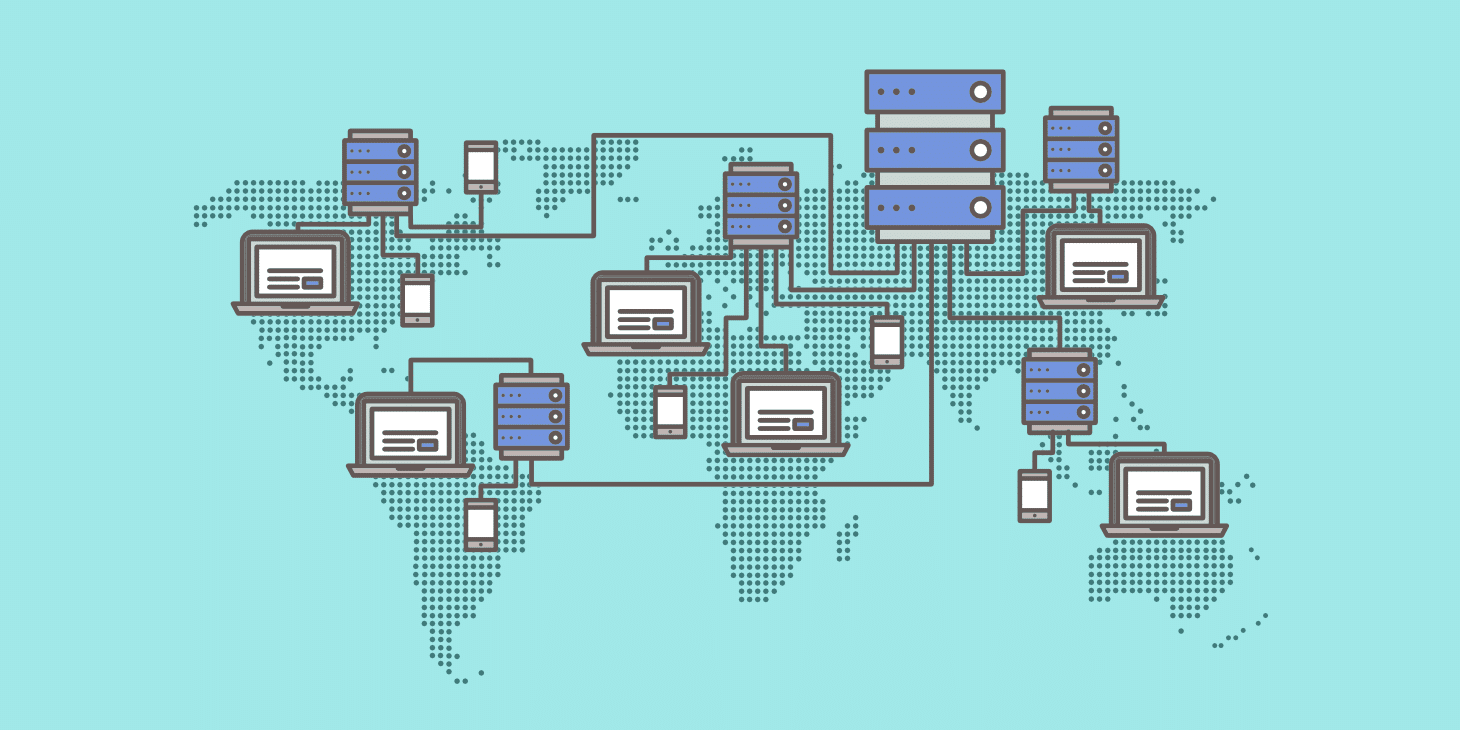 WordPress CDN – Why You Should Be Using One in 2020 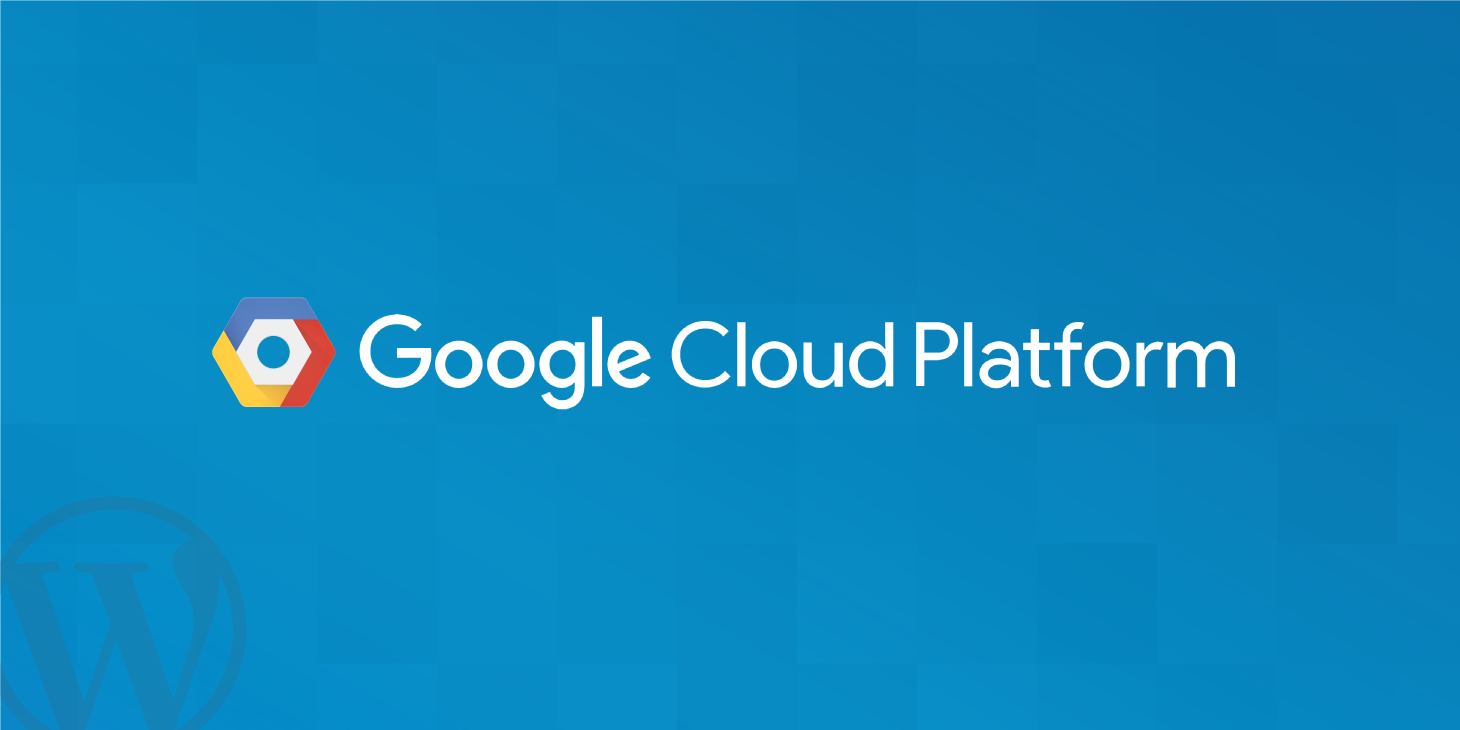