When you’re planning to create a website, it’s likely that you’ll look at several different CMS options. As always, WordPress is a strong choice and one that we highly recommend.

Of course, there are some alternatives to consider as well, such as Magento. Its unique capabilities have helped it rise through the ranks lately. But just how popular is it?

Well, in a nutshell:

To show you where these conclusions are coming from, we’ve gathered together some useful statistics about Magento’s market share. We’ve also thrown in some information about other popular CMSs, so you can directly compare them. Let’s get to it!

According to data collected by W3Techs, Magento currently powers 0.8% of all websites on the internet, including those without a CMS or with a custom-coded foundation: 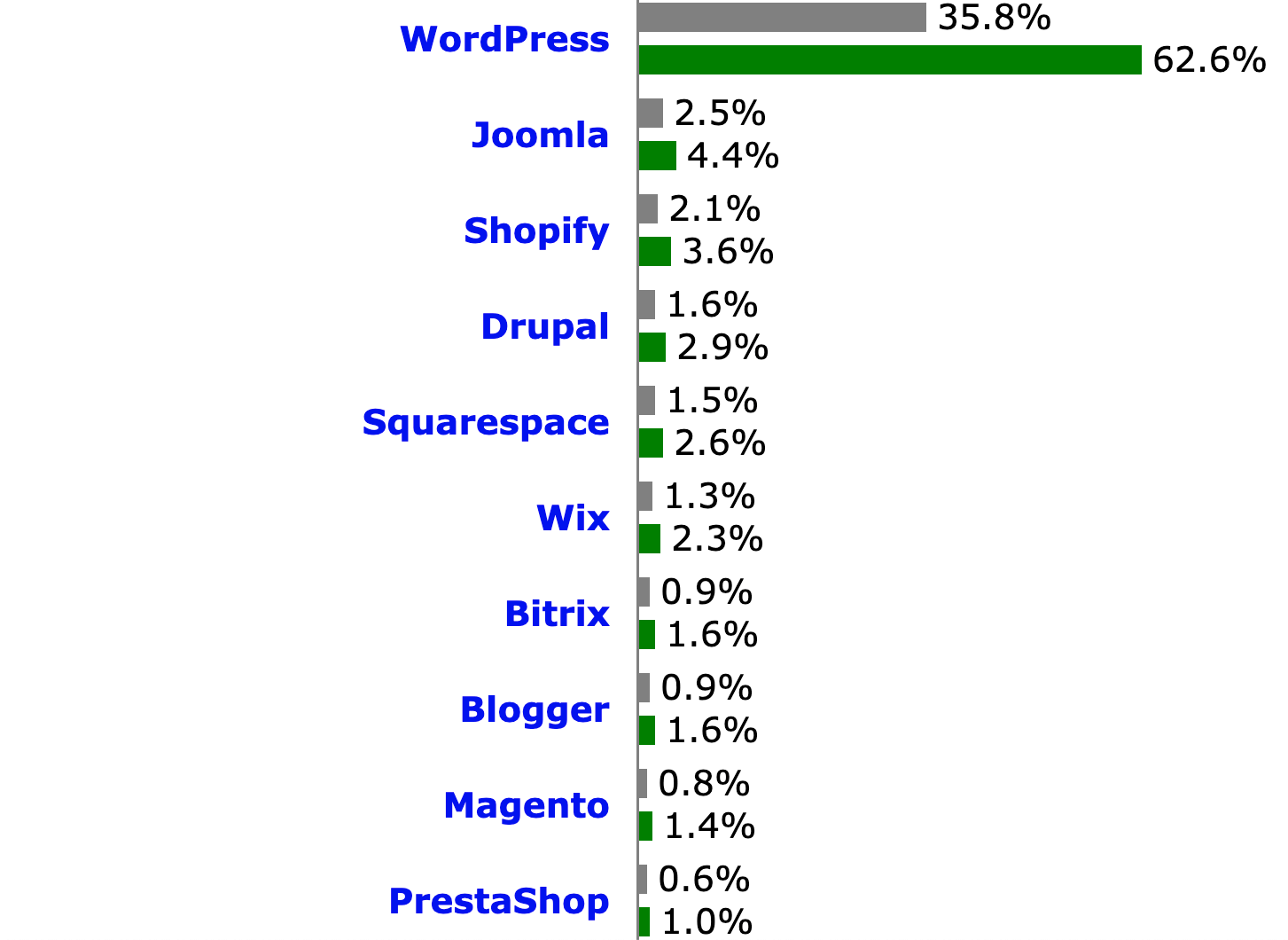 This makes it the ninth most popular CMS in the world. At first glance, ninth place doesn’t seem that impressive. However, we’re talking about a list of fiftyy-seven CMSs (when we discount those that hold less than a 0.1% market share).

We also need to consider the platforms Magento is up against. WordPress currently holds 43.3% of the market, for example, and it’s been around for a long time. It would be very difficult for any newer software to top that kind of influence.

In fact, the CMS at the number-two position (Joomla) only holds a 2.5% market share. WordPress aside, we could split the top ten CMS systems into two sub-sets: those ranging from the second position to the sixth, where we can see a discrepancy up to more than 1%, and those from the seventh position to the tenth, where the biggest difference in market share is 0.3%.

As the old saying goes, you shouldn’t judge a book by its cover

It’s important not to judge Magento based on its statistics devoid of context. When you begin to examine the platform in more detail, you’ll discover that there’s a lot more to it than you may have initially thought.

For starters, our friends over at BuiltWith estimate that there are currently more than 187,500 live websites operating with a Magento system. Within that list, you’ll find some incredibly successful businesses, including Coca Cola and Christian Louboutin. That’s not at all bad for a ninth-place system.

It’s also important to remember that Magento is actually more of an ecommerce system than a standard CMS. As a result, we need to slightly refine the data we’re considering. In the BuiltWith ‘ecommerce Usage Distribution’ category, for instance, Magento comes in at number three: 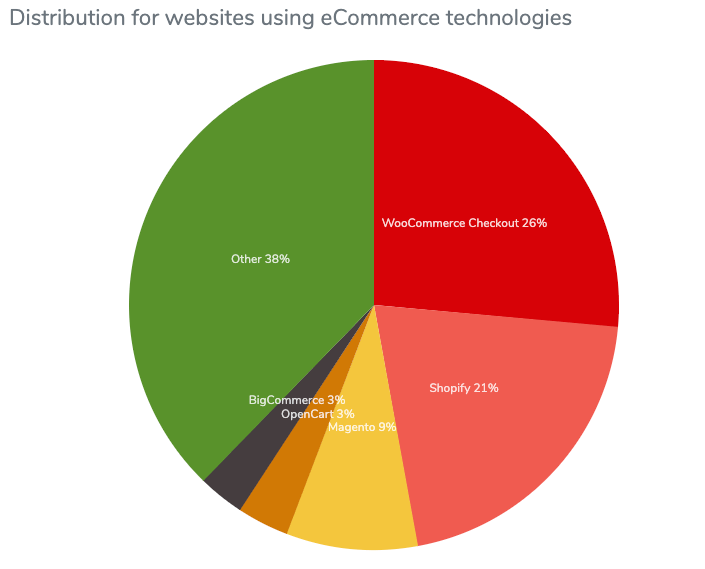 This means it’s beaten only by WooCommerce and Shopify, two of the largest ecommerce platforms on the market.

Using BuiltWith, we can also view the market share for websites that fall into the Quantcast lists of the most-trafficked websites. Here’s how Magento holds up when segmented by Quantcast rank:

This lets us know that Magento is particularly popular among high-traffic websites, like the ones we mentioned earlier. The fact that it can handle these kinds of sites clearly demonstrates its flexibility – so it’s not a platform to disregard.

This is where things get a little tricky. Of course, consistent growth can never be guaranteed. Situational errors or unforeseen circumstances can alter the way the public perceives a platform and may affect its popularity as a result.

To make an informed estimate of what will happen with Magento in the near future, let’s circle back to the data compiled by W3Techs. In particular, we’ll focus on this handy chart that depicts the rate of growth for some of the most popular CMSs currently available on the market:

As you can see, Magento has actually experienced a 33% drop in market share between 2018 and 2020. There are numerous possible reasons for this, although the increased demand for faster solutions like Wix is likely to have played a role.

Other popular CMS platforms have faced much worse declines in shorter amounts of time. As with any area of business, market demands for CMSs are constantly changing, and it can be difficult to keep up. The reality is that only time will tell what’s in store for Magento, but it’s not time to write it off just yet.

How does Magento’s growth hold up when compared to other popular ecommerce platforms?

WordPress dominates the CMS market and there’s no chance of it budging anytime soon. In addition to holding the biggest market share, it’s also experienced the most growth.

In that context, the market share held by Shopify has dramatically increased over the past few years. In January 2018, it held just 0.9% of the ecommerce CMS market. By January 2020, it had hit 1.9%. BigCommerce, on the other hand, sits at 0.2% since it began operation in 2015:

As you can see, although BigCommerce not only hasn’t experienced a drop in market share but it also doubled it, its popularity is still behind for making it to the top ten.. Similarly, since the beginning of 2020, many of Magento’s competitors have either stalled or continued to lose their market share.

This can be easily demonstrated via the use of Google Trends. Here, we’ve put together a chart that depicts the level of interest in Magento’s more direct competitors since the beginning of 2019. We’ve excluded WordPress this time in favor of BigCommerce, Shopify, and OpenCart: 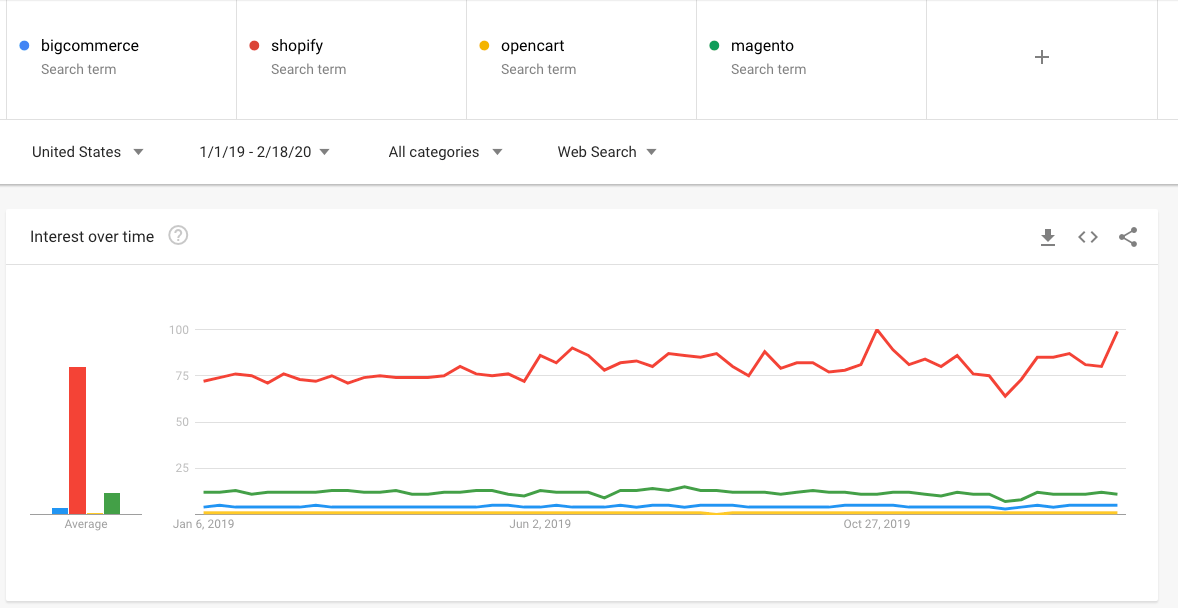 As the graph depicts, only Shopify has had a sizeable market interest. However, Magento is hitting consistently higher levels than the other remaining options.

So, Is Magento a valuable CMS solution?

In short, the answer to that question is yes. Magento’s open-source software offers a range of capabilities that make it a valuable option for any website owner. It even provides out-of-the-box features for those looking to craft an effective ecommerce site.

Of course, WordPress is also a fantastic ecommerce solution, thanks to WooCommerce or other ecommerce plugins. In particular, thanks to the availability of plugins and themes, it’s an excellent choice if you want to run a store alongside a blog, business site, forum, or other types of websites.

That makes it well worth adding to your shortlist of platforms, alongside more niche options like Magento.