Your current host could be costing you time and money — get them back with Kinsta. Learn more
Kinsta Blog

What Is the Average Backend Developer’s Salary? The Latest Data for 2021 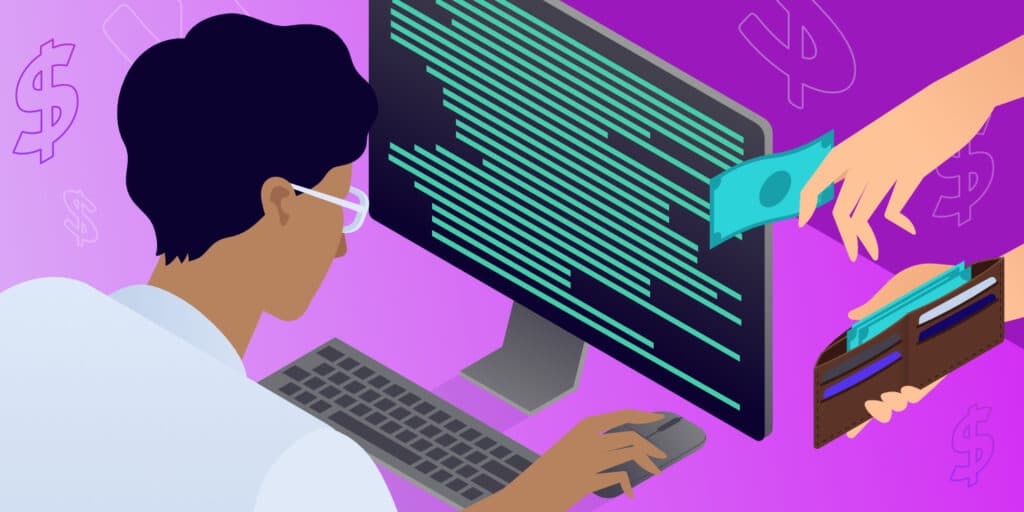 One of our previous articles about full-stack developer salaries touched upon the differences between a frontend developer and a backend developer.

While full-stack development is an exciting and dynamic career path, it’s not for everyone. As such, if you’re thinking about a career in programming, you might be looking for more information about backend development. That’s why we’ve put together this guide.

By the end of this article, you’ll know what you can expect if you decide to follow this career path, as well as whether it’s worth it to become a backend developer.

Backend Development: What Is It?

You’ll work with databases, server technologies, APIs, and various cloud-based platforms, as well as other elements of server-side development.

Let’s take a deeper look into a backend developer’s job requirements and responsibilities.

Wondering what you could (or should!) be making as a backend developer? 💰 Read on... 👀Click to Tweet

As a backend developer, you’ll write server-side scripts that create protocols and routines responsible for helping websites and apps communicate with external servers so they can retrieve all the necessary information.

You’ll also take care of all server logic, databases, and client-server data flow. While a good majority of your work is not immediately visible, it’s crucial to ensure that the core of any website or application runs smoothly.

As such, you’ll need to be knowledgeable in the following technologies if you want to fulfill the backend developer job requirements:

It’s worth mentioning that the list above doesn’t mean you have to be proficient in all of those languages, frameworks, and databases. Learning the complete list of them would not only take you years, but it would also be nearly impossible to master all of them.

It’s far better to specialize in a particular language and develop the rest of your tech stack to fit that language. Most backend developers focus on one or two languages and their accompanying technologies. Don’t forget that as you gain experience in your field, you can expand your skillset later.

Aside from the technical know-how, you’ll also need a few additional skills under your belt that will make your job as a backend developer a lot easier. These include:

The skills listed above will not only help you in your day-to-day job activities, but they’ll also help you translate business requirements into functional code.

Are Backend Developers in Demand?

According to Columbia Engineering Bootcamp, backend developers are in hot demand right now. These claims are backed by HubSpot’s study that shows global ecommerce retail sales will top $4.5 trillion — an industry that heavily relies on backend developers to deliver the best possible user experience to their consumers.

Statistics from the US Bureau of Labor and Statistics show that this profession will grow 13% by 2028, thanks to a rise in the popularity of mobile devices and the ecommerce industry.

With statistics like these in mind, it’s safe to say that backend developers have a bright career ahead of them. In other words, if you decide to pursue this career path, you’ll have no problem finding job opportunities.

So now that we’ve covered what backend development is and the skills and knowledge you’ll need to succeed in the role, let’s talk about the average salary you can expect.

According to Glassdoor, the average base pay for a backend developer is $80,713, calculated from 200 salaries submitted anonymously to Glassdoor. The lowest salary submitted was around $48K, while the highest was about $132K.

PayScale’s numbers are closer to Glassdoor’s and report an average backend developer salary of $81,161 per year. This number was based on 58 salaries submitted to PayScale anonymously. The lowest salary as per PayScale is $51K, and the highest is $131K.

On the other hand, ZipRecruiter lists the average backend developer salary at $83,770 per year, with the low end being $33,500 and the high end reaching $149K.

Based on these numbers, the average salary for a backend developer is $90,826 per year. That’s not bad at all, but how does it compare to similar jobs?

Below, we’ll take a look at how the typical backend developer salary stacks against frontend and full-stack developer salaries, as well as how earning potential varies by experience, location, and the programming languages you specialize in.

As such, it’s reasonable to expect that your salary will be higher than that of a frontend developer. But what do the numbers say?

Indeed lists the average frontend developer salary at $103,887 per year with a $2500 yearly cash bonus.

Based on these numbers, the average frontend developer salary comes out to $80,558.

At first glance, the average salary of a frontend developer seems not too far behind a back developer’s salary. But once you take a closer look, the difference is around $10,000 per year. It is not a staggering difference, but it certainly proves that a backend developer’s job is more demanding.

However, many full-stack developers often end up working in backend development, so it’s certainly interesting to see how those two salaries stack up.

Indeed’s numbers show that the average full-stack developer salary is $106,242 per year, with an additional $4,100 cash bonus annually.

But it’s on par with the expectations of full-stack developers having a slightly higher salary due to a broader skillset and knowledge of both frontend and backend technologies.

For starters, let’s look at entry-level salaries for the role.

According to Glassdoor, an entry-level backend developer with <1 year of experience can expect an average salary of $82,301 per year, with a low of $50K and a high of $136K.

PayScale lists the average entry-level salary at $61K per year for less than a year of experience.

As your experience grows, you may eventually reach the status of being the lead on all major projects as well as mentoring up-and-coming junior backend developers. At that level, what can you expect when it comes to your salary?

If you have more than 10 years of experience, the average backend developer salary is $74K per year, according to PayScale.

Based on these figures, a backend developer’s average entry-level salary comes down to $74,888 per year, while the senior-level salary averages out to $99,064 per year.

Location is another factor to consider when you’re looking at the average salary for a backend developer. For example, according to PayScale, if you’re in San Francisco, California, you can expect to earn an average of 10.9% more than the national average.

The same applies to Dallas, Texas (7.2% more) and Denver, Colorado (4.7% more). Contrary to that, the lowest backend developer salaries are in Orlando, Florida (38.4% less) and Boston, Massachusetts (7.9% less).

According to Indeed, the highest-paying cities for a backend developer are San Francisco and San Jose in California. In contrast, the lowest-paying cities are Dallas, Texas, and Las Vegas, Nevada.

In other words, if you want to earn more in your backend development career, you’ll have to move to the West Coast.

Now, where you live can weigh heavily on the salary you receive for your work as a backend developer. The demand for such developers can drive up the average wage. Likewise, if there’s a lack of demand, that can result in a lower average.

Let’s take a moment to review the countries where backend developers are in high demand (data courtesy of ZipRecruiter):

We mentioned earlier that a backend developer is typically familiar with more languages and technologies than a frontend developer. That said, your choice of language has a direct impact on how much you can expect to make.

For example, PayScale shows that skills in Node.js are correlated to pay that is above average. On the other hand, skills that pay less than the average market rate include Java, Linux, JavaScript, and MySQL.

According to Indeed, skills in XSLT, Haskell, and Go can net you anywhere between a 10% and 51% increase in salary.

A career in backend development is rewarding, but you might not like the idea of working for a company as a full-time employee.

Maybe you’d like to work on a variety of projects and have more of a freedom-based lifestyle. Perhaps you’re interested in using your backend developers’ skills as a freelance WordPress developer or web developer. Whatever the case may be, a career in backend development doesn’t mean you have to tie yourself to one company.

That said, while a freelance backend developer career is possible, what happens to your salary?

According to Codementor, a freelance backend developer can earn between $61–$80 per hour.

There isn’t a lot of information on how much a freelance backend developer can make. However, one thing to remember here is that you’re directly responsible for your income as a freelancer. How much money you make per month or year depends on the number of projects you can reasonably take on, as well as your hourly rate.

Is It Worth It to Become a Backend Developer?

So, when it comes to backend developer salary, is it worth it to become a web developer, or should you pursue a different career?

Based on the numbers we’ve seen, backend developers can make a decent living. In fact, with an average salary of $90,826 per year, money shouldn’t be a concern.

Of course, you have to consider other factors such as location, the programming language and technologies you’re proficient in, and experience — all of which can impact how much money you end up making.

Even if you decide to go the freelance route and become a freelance backend developer, you can still make decent money and have a career you love.

Money aside, it’s also essential to consider what you love doing and your natural strengths and skills. If analytical thinking, problem-solving, and outside-the-box thinking come naturally to you, a career in backend development would be a good fit.

The same applies if you love working behind the scenes and are more interested in the server-side of things rather than spending time on design which falls under the realm of frontend development.

With that in mind, and the fact that backend developer jobs are high in demand will continue to grow, a career in backend development is worth pursuing.

Demystifying salaries one job at a time 💰 First up: backend developers 👨‍💻Click to Tweet

Backend developers face the unique challenge of troubleshooting, problem-solving on the spot, and translating business requirements into working code.

As such, your job might seem quite challenging on some days, while at other times, it might be nothing but smooth sailing. While the base salary for an entry-level backend developer might seem low at $73,361, the more experience you gather, the easier it is to command 6-figures.

Keep in mind that if you decide to pursue a career in backend development, you’ll make more money than a frontend developer, but not as much as you would earn as a full-stack developer. However, if you love working behind the scenes and think you can successfully translate business requirements into efficient and elegant code, going the backend route could be the right fit.

If you’re a talented backend developer and you’re interested in working with a highly skilled team in a relaxed environment where culture is as vital as technical excellence, take a look at our openings.

What are your thoughts on these salary levels for a backend developer? Let us know in the comments section!