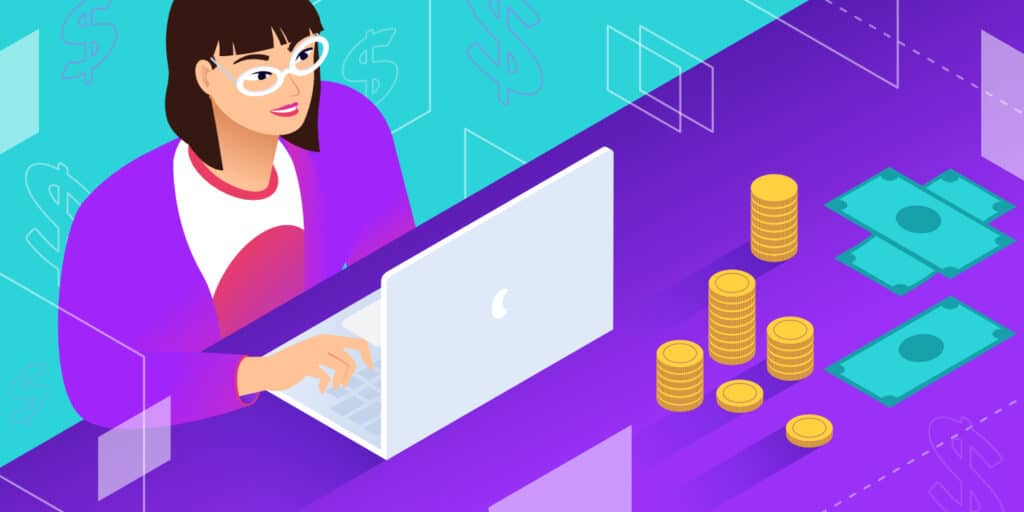 You enjoy playing around with HTML and CSS. You’re creative and have an eye for design, and you spend your days in your favorite text editor creating websites or applications from scratch. If you can recognize yourself in those statements, a career in frontend development might be the perfect choice for you. Let’s take a look at frontend developer salary expectations.

By the end of this article, you’ll know if a frontend developer career is a suitable choice for you.

What Is Frontend Development?

Frontend development focuses on a website’s or app’s frontend — the part that the users see and interact with. As a frontend developer, you’ll work closely with UI and UX designers to translate their designs into functional websites.

It’s also a highly collaborative career path as you’ll have plenty of opportunities to work with other people and teams. As a frontend developer, your workflow will involve several other people, including designers, artists, and marketing professionals.

It’s also worth mentioning that as a frontend developer, you can efficiently work from home. All you need is an internet connection and a computer. As such, some companies might be open to offering you a remote position and even reimbursing you for the computer or your internet bill.

Kinsta is a fully remote company with team members spanning the entire globe. Check out our careers page to learn more.

As a frontend developer, you need to have a working knowledge of fundamental design principles and a few programming languages that primarily find use on the frontend of websites and applications.

On top of that, you might also spend time doing customer or user research and conduct A/B tests to ensure the website or application in question gives the best possible ROI. Not only that, but testing allows you also to find and iron out bugs so you can produce websites and apps that are easy to use.

In terms of technical skills, you’ll need to be familiar with the following languages:

If you enjoy playing around with HTML and CSS and have an eye for design, a career in frontend development could be for you. ✨👨‍💻 Learn more here 👇Click to Tweet

Aside from the technical requirements listed above, there are several soft skills that you should master if you want to increase your chances of getting hired as a frontend developer.

If you have all of the above skills, you’re ready to start your search for a frontend developer job.

Do Frontend Developers Get Hired?

According to the Bureau of Labor Statistics, web developers employment in the US is projected to grow 8% from 2019 to 2029.

In other words, if you want to pursue a career in frontend development, you’ll have no shortage of opportunities for getting hired and making a steady income.

Indeed lists a slightly higher salary, but their sample size is also larger than Glassdoor’s. They say the average frontend developer salary is $103,832, with an average $2,500 yearly cash bonus.

PayScale reports the average salary at $75,310 per year, with a low of $50K and a high of $90K. PayScale’s numbers are based on 4,206 salary profiles submitted by frontend developers.

Based on the numbers above, we can deduce that the average frontend developer salary is $89,948 per year — which is nothing to scoff at.

But is it on par with other similar jobs?

In the next section, we’ll compare the average frontend developer salary with similar jobs and how other factors such as location and experience impact earnings.

Backend developers work on the backend of a website or an application. They ensure that everything works smoothly and are in charge of the server-side of things, such as databases, client-server data flow, server logic, and more.

As such, their job requirements and responsibilities are more complex than those of a frontend developer. It’s logical to assume that their salary will be higher, and the numbers below prove it.

First up, Glassdoor lists the average base pay for a backend developer at $79,518, with the lowest salary being around $48K, while the highest is around $132K.

Indeed reports the average backend developer salary at $118,856 per year, with an added $4,000 annual bonus.

Finally, ZipRecruiter calculates the average backend developer salary to be $83,770 per year, with the lowest being $33,500 and the high end reaching $149K.

Full-stack developers have the combined skills and the knowledge of both frontend and backend developers. Their job is even more complex than a backend developer’s because their responsibilities and skill set are broader.

Let’s see how their earnings compare to a frontend developer’s salary.

Glassdoor says that the average salary for a full-stack developer is $97,849 per year. The lowest salary is $61K, and the highest is $156K.

According to Indeed’s numbers, the average full-stack developer salary is $106,242 per year. Indeed also lists an additional $4,100 cash annual bonus.

ZipRecruiter reports the average salary is $102,744 per year. The lowest is $38K, and the highest full-stack developer salary is $150K per year.

So far, looking at the numbers above, we can see frontend developers make slightly less money than backend and full-stack developers.

But what happens when you factor in job experience? How much money can you make as an entry-level frontend developer, and, more importantly, how will your salary increase as you move into senior roles?

As an entry-level frontend developer, you can expect to make $97,377 per year, according to Glassdoor. The lowest salary reported is $54K, and the highest is $176K per year.

PayScale, on the other hand, reports lower numbers. Their average entry-level frontend developer salary is $61K per year.

ZipRecruiter lists the average entry-level frontend developer salary at $57,017 per year, with a low of $25K and a high of $113K.

As you gain more experience, your salary should reflect that. Not only will you have more knowledge under your belt, but you’ll also transition into senior and lead developer roles. You may even mentor entry-level frontend developers. Here’s what the numbers say.

Glassdoor reports the average frontend developer salary if you have more than 10 years of experience is $96,985, with a low of $65K and a high of $144K.

According to PayScale, a senior frontend developer has an average salary of $93K per year. Meanwhile, ZipRecruiter lists it at $118,440 per year, with a low of $32K and a high of $169K.

Based on these figures, a frontend developer’s average entry-level salary comes down to $71,798 per year, while the senior level salary averages $102,808 per year.

In other words, towards the end of your career, you can expect to be making an extra $40K per year.

No matter what your job is, where you live can directly impact how much money you make. The same applies to a frontend developer’s job. Given that this is a technical position, it stands to reason that some geographic regions where tech jobs are high in demand will pay more than others.

Are you tired of subpar level 1 WordPress hosting support without the answers? Try our world-class support team! Check out our plans

Similarly, Indeed reports that the highest paying city for a frontend developer is San Francisco, with an average salary of $157,674 per year.

It’s also worth mentioning that if you’re looking for a job outside of the US, Daxx reports Switzerland as the highest paying country for frontend developers in Europe, while Melbourne and Perth are the best places for salaries in Australia. Vancouver and Ottawa rank the best in Canada.

As mentioned before, a frontend developer is proficient in HTML, CSS, and JavaScript. Often, they’re also familiar with JavaScript frameworks such as Angular and React.

As per Indeed, skills and areas of experience that can influence your salary as a frontend developer include AWS, machine learning, and continuous integration.

On the other hand, PayScale mentions Less.js, React Native, Django, Golang, Redux.js, and other languages as having a direct impact on your salary.

If you’d instead not work for a single company for the entirety of your frontend development career, a freelance route is certainly an option. The benefit of this approach is that you’re free to choose which projects you take on, the number of clients you work with at a time, and how much you charge for your work.

According to Glassdoor, the average freelance frontend development salary is $70K per year, with a low of $42K and a high of $120K.

ZipRecruiter reports the average freelance frontend developer’s salary at $84,380 per year, with a low of $25K and a high of $146K.

How to Make More Money as a Frontend Developer

However, that doesn’t mean that these numbers are final. There are a few things you can do as a frontend developer to make more money.

For example, you could:

Is It Worth It to Become a Frontend Developer?

With an average salary of $89,948 per year, a career in frontend development is a viable choice. The pay isn’t that much lower than similar professions, so money shouldn’t be an obstacle.

Where you live and the skills you have under your belt can impact your salary, so expanding your knowledge and moving to a different location can increase your yearly income.

With the question of income out of the way, it’s now time to consider the other.

If you’re a highly creative person who enjoys collaborating with others, iterative design, and you love testing and analyzing the results, the frontend developer job is a perfect match.

Pair that with the fact that frontend developers are in high demand, and you can see how this is a career worth considering.

Love spending your days in your favorite text editor creating websites or applications from scratch? 👀 Learn how much you could be making as a frontend web developer in this guide 💰Click to Tweet

If you choose to pursue a career in frontend development, you need to consider a few things. Firstly, it’s a creative and challenging position, as you get to bring ideas to life and help ensure websites and applications are easy to navigate and use.

Secondly, to ensure everything works, you’ll often collaborate with other teams, such as the UI/UX team and the backend development team. Few developers work in a vacuum, so it’s essential to keep your communication and collaboration skills well-tuned.

Thirdly, while the pay isn’t as high as some other careers in development and engineering, it’s certainly not so low that you can barely make ends meet. With the base salary averaging $89,948 per year, it’s clear you can make a decent living. Not to mention, you can even explore additional options to boost your income, such as selling courses on frontend development or themes and templates that other designers can use.

Lastly, frontend developers are in high demand, so if job security is a priority for you, this career path is without a doubt a great career choice.

What are your thoughts on these salary levels for a backend developer? Has your experience been different? Let us know in the comments section!